If you have an ancestor who served in the British military and arrived in Western Australia in the mid-19th century, you may discover that he was a veteran of the Crimean War. Enjoy the site. 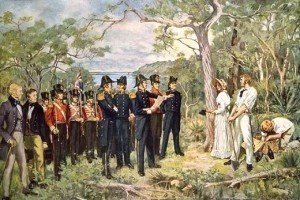 The Foundation of Perth
[painting by George Pitt Morison]

In 1849 the Swan River Colony (not yet Western Australia) was one of the farthest outposts of Empire and in terms of European settlement, only twenty years old. It was suffering a severe labour shortage; over two thousand nautical miles from the more populace eastern seaboard, what to do?

The colonists had been lobbying Governor Charles Fitzgerald and the Legislative Council to introduce the transportation of convicts as a means of procuring a cheap labour force essential to the colony’s growth. By this time all but one other colony (Tasmania) had ceased transportation.

‘The Emigrant’s Friend’, published in London in 1848, very clearly describes the parlous state of the Swan River Colony and its prospects for emigrants.
It begins:
This Colony, which was considered to offer such golden hopes to the Colonist, is now, from many causes, far inferior to the other Colonies in the same part of the world, and these disadvantages are not counterbalanced by corresponding advantages of any description.
And goes on to say:
Were 100,000 Emigrants to land at Swan River, with money, food, goods, and labor, and had all the assistance that Government could render them, they could never raise Swan River Colony to eminence or permanent prosperity.
The booklet summarises:
We will not dwell longer on the Swan River Colony, no Emigrants have gone there for years past, nor would we advise any one to choose his resting place there. Swan River has little or nothing to recommend it, and when compared with the far richer and more healthy districts of South Australia, and especially Port Philip, it falls far short of them in every one of the requisites for a successful Colony. We have spoken of them all with candour and truth, and with the same desire of guiding faithfully, the Emigrant here; also, we have represented the unfortunate Swan River Colony as experience has shown it to deserve.

From 1850 to 1868 forty three ships transporting convicts journeyed to the Swan River Colony. Starting with the Scindian and ending with the Hougoumont, 9,720 convicts were destined to complete their sentences of penal servitude in the Colony.  Also on board these ships were over 1,000 men of the enrolled pensioner force whose role was to guard the convicts at sea and act as an auxiliary military unit after landfall. Many warders and gaolers and some policemen joined the convict establishment to assist in law and order in the Colony.  Their wives and children travelled with them or joined them later.

Many of these men of the convict establishment, the convicts themselves and other military pensioners were veterans of the Crimean War. 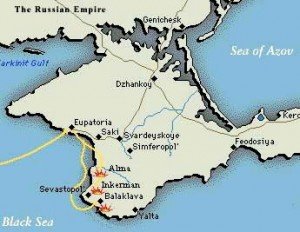 In September 1854, the armies of Britain, France and Turkey invaded Russia, ostensibly over disputed access to the holy sites of Jerusalem.  But of course there were other agendas.  In the months and years that followed, over half a million soldiers died from wounds, disease, starvation and cold.  The Crimean War was a medieval conflict fought in a modern age.  Nonetheless, the war produced some interesting celebrities, both military and civilian. More importantly it paved the way for major changes in the structure of the British Army. Click here to find out more about the war.