The Belgravia was built in 1862 by William Doxford  at Pallion, a ship building yard in Sunderland. The owner of this convict transport was the Somes family – nephews of Joseph Somes, one of the biggest ship owners in Britain until his death in 1845.  The family company was later named the Merchant Shipping Company. Belgravia’s first two voyages were from London to India and thereafter to Auckland.  She made a total of only five voyages before being wrecked in 1866.

On her last voyage she left Portland, England on 7th April 1866 bound for the Swan River Colony. She carried the 34th of 37 shipments of male convicts destined for Western Australia. The voyage took 88 days and the Belgravia arrived in Fremantle on 4th July 1866 with 106 passengers and 275 convicts [Erickson]. John E.W. Jackson was the captain of the vessel.

Of the 106 passengers mentioned above, 96 were pensioner guards and their families, the number being made up of 30 pensioner guards, 23 wives, 21 sons and 22 daughters. In addition there were four warders, four women and three children (Perth Gazette 6 Jul 1866). Two of the warders were John Craig and John Richard Gray  veterans of the Crimean War; Gray being a survivor of the Charge of the Light Brigade.

The two deaths recorded on the convict shipping and description lists were for Michael Egan (#8841) and William Hamilton (#8889) and other sources say they died on the voyage out. There were 277 convict numbers assigned for the voyage ranging from (8771 to 9047). The [Bateson] account for this voyage disagreed with the other sources claiming that 277 convicts embarked and 276 arrived.

Noteworthy passenger: Samuel Speed, born in England’s Midlands, exact date and place unknown, was sentenced to seven years transportation at the age of 18 for firing a haystack outside Woodstock Union Workhouse in Oxfordshire. At his trial he and his partner in crime said they did it because they were starving and expected to better their lot by getting into prison. Speed was noteworthy for his longevity (over 95 years) and during his time in Western Australia never got into any trouble again. He is reputed to be Australia’s last living convict.

A journal kept by William Irwin for this, his fifth voyage, is preserved in the Mitchell Library in Sydney, New South Wales. Researchers can view the 75-page journal on microfiche in the State Library of Western Australia.  William Smith, the Surgeon Superintendent of record was aboard on his third voyage, but his journal seems not to have survived.  Was Belgravia a “happy ship”?  This somewhat optimistic reporter from the Bridport News 14 Apr 1866 seems to think so! 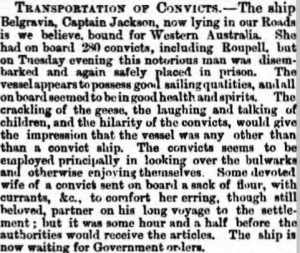 It was reported in the Brisbane Courier, 18 Dec 1866, that the Belgravia was wrecked off Coarumoodo, India.