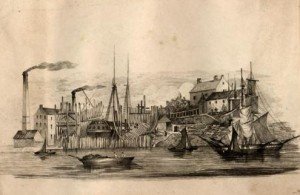 Laing-Deptford Dockyard 1840s
[SINE Project University of Newcastle]
Clara was built at Sunderland in 1859 by Sir James Laing (1823-1901) at his yard located on the south bank at a bend of the River Wear at a site known as Deptford. This is not to be confused with Deptford in the east end of London on the Thames from which ships often left for Australia. Laing had followed in his father’s footsteps as a major shipbuilder on the river and became Chairman of the River Wear Commission. He was also a director of the Suez Canal Company; he was knighted in 1897.

Clara was a three-masted ship of 938 tons registered in London by her owners Teithe & Smith Co. She was an oak ‘late frigate’ hull type. Her dimensions were length: 179.2 ft.; breadth 35.6 ft.; depth 22 ft.; draught 16.5 ft. In 1863 she underwent repairs and was copper fastened and sheathed in yellow metal. She was NOT the same vessel of the same name that brought convicts to Western Australia in 1857. 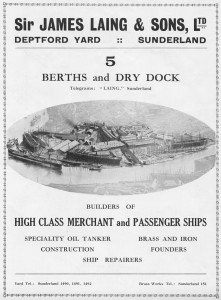 Clara left Portland on January 30, 1864 bound for the Swan River Colony. She carried the 30th of 37 shipments of male convicts destined for Western Australia and arrived in Fremantle on April 13, 1864 with 112 passengers and 301 convicts. Rees Jones Barrow and William Crawford were the captain and surgeon respectively.

Of the 112 passengers mentioned above, 87 were pensioner guards and their families, the number being made up of 28 pensioner guards, 20 wives, 21 sons and 18 daughters. The remaining 25 passengers included six warders, some with families. No convicts died on the voyage, however Dr William Crawford’s journal indicates that the wife of guard John Trueman died and was buried at sea;  Mrs John Hall gave birth to a premature baby;  William Lambe, son of guard Thomas Lambe died. 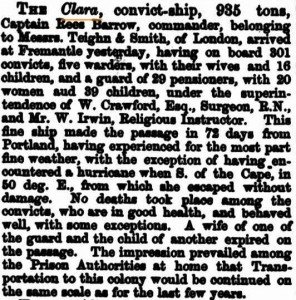 Researchers may also be interested in A Voice of our Exiles or the ‘Clara’ Weekly Journal edited by Francis S. Simpson who was a convict on the voyage. This contains literary contributions from the convicts and a weekly record of events on board. It is held at the Australian National Library in Canberra from which copies are available.

Photographs courtesy of The Sunderland Site and University of Newcastle’s SINE Project.