Hougoumont  was a three-masted full rigged ship of the type commonly known as a Blackwall Frigate of 875 tons gross with dimensions 165.5 feet long, 34 ft. beam and 23 ft. depth of hold. Hougoumont was owned by Duncan Dunbar and constructed at his dockyard in Moulmein, Burma in 1852.  She was named after the Château d’Hougoumont where the Battle of Waterloo was fought.

Emigrant ship
In the 1860s, Hougoumont’s tender was accepted by the Emigration Commission. On June 9, 1866 she sailed from Plymouth to Port Adelaide, carrying 335 government-assisted emigrants arriving in September.  By now Duncan Dunbar had died and she was owned by Luscombe of London.

The last convict ship
Hougoumont was employed as a convict transport for Western Australia and left London on October 12, 1867 bound for the Swan River Colony. She carried the last of 37 shipments of male convicts. The voyage took 89 days and the Hougoumont arrived in Fremantle on January 9, 1868 with 108 passengers and 279 convicts. One death occurred on the voyage. William Cozens and W. Smith were the captain and surgeon respectively.

One of the convicts, George Cowper aka Martin Griffin, had been transported to the Colony on a previous occasion when he arrived on the William Jardine in 1852. He had somehow made his way back to England, re-offended and returned on the Hougoumont with a new conviction and alias.

Of the 108 passengers mentioned above, 87 were pensioner guards and their families, the number being made up of 44 pensioner guards, 18 wives, 10 sons and 15 daughters. Of the 21 passengers remaining, four were prison warders: James Mandeville Archdeacon, William Howard, Charles McGarry and Thomas Rowe.  Eighteen men have been identified as veterans of the Crimean War: 15 pensioner guards, two warders and convict Patrick Keating who saw action in the Charge of the Heavy Brigade at Balaclava.

The Fenians
Among the convicts were 62 Fenian political prisoners, transported for their part in the Fenian Rising of 1867. Seventeen of these were military Fenians who had been court martialled in Ireland in 1866/67 for mutinous conduct and/or desertion.  A number of the Fenian convicts wrote journals and memoirs of the voyage, e.g. Denis Cashman, John Casey and Thomas McCarthy Fennell. During the voyage they entertained themselves by producing seven editions of a shipboard newspaper entitled the Wild Goose.

End of her Days 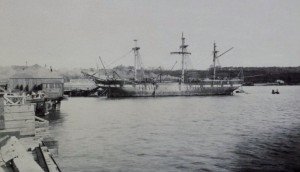 There are records of emigrants arriving in Melbourne on board Hougoumont in 1869. She was still listed in Lloyd’s Register in 1883, but is not in the 1889/90 volume.

The author, W Clark Russell, claimed to have served on the Hougoumont. The 1894 publication My First Book related the experiences of a number of authors including Rudyard Kipling, Arthur Conan Doyle, Robert Louis Stevenson and W Clark Russell.  In a footnote to this collection, Russell writes: In this ship, the ‘Hougoumont,’ I served three years. She was a transport, and was in the China war, 1860-1. Her burden was about 1,000 tons. This picture represents her as a sheer hulk employed in the construction of the Forth Bridge. I saw her towing down Channel in this state in 1889—she drew abreast of my house at Deal—and I could have wept to witness my old floating home in so miserable a condition.—C. R.

In 1869 one of the Fenians – John Boyle O’Reilly – who had arrived on the Hougoumont escaped to America and from there ultimately helped engineer the escape of six other Fenian prisoners (former military) from Fremantle gaol on the American whaler Catalpa in 1876.