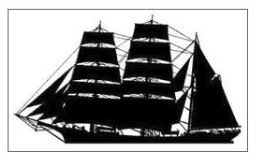 Naval Brigade left Woolwich on 31st October 1873 with at least fifty military pensioners and their families bound for Western Australia.  These men were no longer guarding convicts on the voyage, transportation having ceased in 1868. The pensioners would supplement the Colony’s enrolled pensioner force which had been depleted by movement to the other colonies, ill health or death. 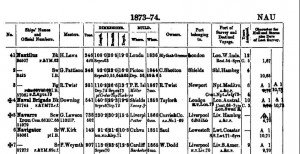 Lieutenant Colonel Bruce reported the status of the enrolled pensioner force from 1st June 1850 to 9th January 1868 – from start to finish of the arrival of convict transports to the Colony.
Total number arrived in the Colony:  1191
Deduct: Natural Deaths:  130
Accidental Deaths:  18
Shot by comrade:  1
Suicides: 6
By expiration of pensions:  49
Struck off Pension List:  7
Transferred from the Colony:  399
Total remaining who came here as Convict Guards:  581

Bruce also indicated in his report, To meet future casualties by death and transfers from the Colony as well as to let it be seen that the Government is not entirely dependent on those now here I recommend that small numbers of married Pensioners, carefully selected both in respect to sobriety and physical fitness, and unencumbered with large families, should occasionally be sent in immigrant ships with a promise of at least three years here on Enrolled pay provided their conduct merits such employment.

Naval Brigade arrived at Fremantle with reinforcements to redress the diminishing numbers on 18th February 1874.  The owners of the vessel by this time were Taylor & Bet, the Master, Captain Downing.  Although no Surgeon Superintendent was required on board (as with most of the convict ships) there was a doctor on the voyage. Dr Charles Boulton Elliott, had been appointed Resident Medical Officer at Champion Bay (later Geraldton) in 1874.  He would be involved in public health for thirty years and a proponent of the building of the first hospital at Geraldton. He was appointed Surgeon in the Western Australian Volunteer Force in 1886.

Among the pensioners were a number of veterans of the Crimean War: Sergeant Edward James, nominally in charge of the other pensioners on board; Sergeants Arthur Allen, Thomas Minorgan and Robert Thompson; Corporal James Rush; Private Daniel Carty and other rank and file men.

On 23rd July 1875, Naval Brigade was on a voyage from Townsville, Queensland when she ran aground and was wrecked off Frankland Island.