Norwood was a London registered 849 ton three-masted ship. She was an oak ‘late frigate’ hull type. Her dimensions were length: 160 ft; beam 31.2 ft; depth: 20.5 ft; draught 15.0 ft. She had two decks and a poop deck with a figurehead of a male bust. She underwent some changes to her cladding in 1860 and was in service until 1881, sailing from London to Australia, New Zealand, the Indies and Africa. In late 1860 she served as a troopship, fitted with guns, taking soldiers to New Zealand to fight in the Maori Wars. 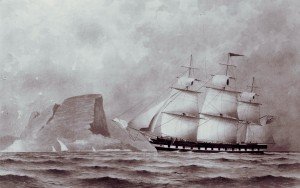 On her second voyage to the Swan River Colony, Norwood left Portland on 13 April and arrived in Fremantle on 18 July 1867. She carried the 36th of 37 shipments of male convicts destined for Western Australia. The voyage took 86 days. Captain Frank Bristow and Dr W M Saunders were the captain and surgeon respectively. Bristow had been captain of Norwood for 15 years from about 1856 to 1870. 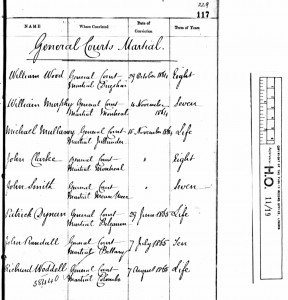 One hundred convicts from Chatham prison, 55 from Portsmouth and 99 from Portland made up the consignment of 254 on this voyage. One convict, John Smith, died of Phthisis (tuberculosis). There were eight convicts sentenced by court martial on board. This was the penultimate convict transport and there were comments in the press that the British Governnment would dump as many bad characters as they could in the lead up to ending transportation to Western Australia. But this was not true of the Norwood’s convict population: 254 was about the average number; the types of crimes were no better and no worse than what had gone before; thus the sentences were no longer.

Thirty pensioner guards, 18 wives and 29 children were on board along with four warders. Ten of the Enrolled Pensioner Force were Crimean War veterans including Private Lewis Fitzmaurice, a cavalry man who had probably ridden in the Charge of the Heavy Brigade at Balaclava. Four children were born on the voyage – a son for Warder Francis and Mrs Lindsey, a son for Private Alexander and Honora Sutherland and a daughter for Private Henry and Ann Garrish. Mrs Vagg, wife of Private Edward Vagg regrettably delivered a stillborn child.

Dr W M Saunders’ surgeon’s journal for the voyage is preserved in the National Archives, Kew. Researchers can view a copy on the Australian Joint Copying Project (AJCP) microfilm reel 3181 which is held in most major libraries and archives throughout Australia. It can also be accessed by subscription on the ancestry.co.uk website.

This was Rev William Irwin’s sixth voyage to Western Australia, and in keeping with some previous voyages, he produced a weekly ‘newsletter’ for the journey titled ‘Norwoodiana’. This is available on microfilm (Call No. 365.34 IRW) from the J S Battye Library, Perth. 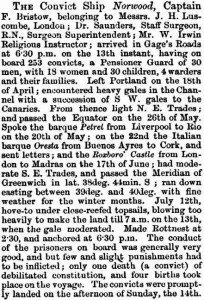