York was built in Sunderland in 1854, but at this point in time, her builder is not known to me. York’s owner was John Allan a ship owner/broker born in Whitby who had shipping interests there and in London. When he died in 1865, his son Colonel John Harrison Allan took over the business. Colonel Allan was better known as a soldier and an amateur archaeologist who designed a family mausoleum at Nunhead Cemetery, Linden Grove, incorporating a portrait in stone of his father (left).

York left Portland on October 8, 1862 bound for the Swan River Colony and arrived in Fremantle on December 31, 1862 after a passage of 84 days. One of the 300 convicts who had embarked died on the voyage. Twenty three convicts were former British Army soldiers who had been court martialled on various charges and sentenced to transportation. To date I have identified only one who served in the Crimean War, but this research is a work in progress. 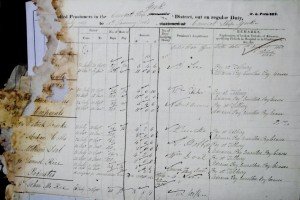 Captain Henry Redpath [1] commanded a crew of 45. Dr Babington and Rev Moore were the surgeon superintendent and religious instructor respectively. Also on board were 49 men of the enrolled pensioner force, their 24 wives and 31 children. Fourteen of the enrolled pensioner force were veterans of the Crimean War. However, identification of these convict guards and their British Army regiments was initially problematic owing to the very bad condition of the Pensions Returns (Pay Lists) which barely survived (see example on the right).

The surgeon’s journal for the voyage did not survive. However, a ship’s carpenter, John Gregg wrote a diary on the voyage which is preserved in the Australian National Library, Canberra. Click here for a transcript of Gregg’s diary, together with definitions of nautical terms, compiled by Juliet Ludbrook, courtesy of the State Library of Western Australia.