James Cunningham had a long and hard service with the 11th Battalion, Royal Regiment of Artillery, much of which was in campaigns on foreign soil.

The South African Frontier Wars (or Kaffir Wars) were initially the conflict between whites (Boers) moving further east, out of the Cape, and Africans (Xhosa) moving in the opposite direction, during the 18th and 19th centuries. When a significant number of British settlers arrived in 1820, the disputes over land and water holes multiplied. There were nine Cape Frontier Wars, increasing in levels of severity. British policy became one of containing the Xhosa, and by the end of the series of wars, the Xhosa had lost much of its prime pastoral land. The 7th and 8th Frontier Wars (1846-47 and 1850-1853) were particularly bitter during which James Cunningham was serving at the Cape and for which he was awarded the South Africa medal.

Cunningham also spent over two years engaged in the Crimean War at the Battles of Alma and Balaclava and the Siege of Sevastopol, earning him more medals, but significantly more pain. He was discharged from the Army in 1856 with chronic rheumatism.

In 1862 he boarded the Norwood bound for Western Australia as part of the enrolled pensioner force. Nothing is known of Cunningham’s time in Western Australia – but at some point he left for Victoria and then turned up in New South Wales in 1879 where his pension was being paid. 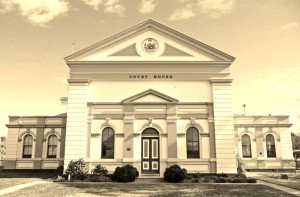 It is in distressing circumstances that he appears on the radar again – in October 1888, the subject of a coroner’s inquest at Burrowa, presided over by the District Coroner, Mr. Wotton. After viewing the body in-situ, the enquiry was adjourned to Burrowa and was concluded in the charge room of the lock-up. It is surprising that the inquest was not held in the new Courthouse completed only a few years earlier (left); perhaps it was determined it would be a predictable verdict.

Cunningham had been working for Messrs. P and J Corcoran at their slaughter yard near Burrowa for nine months before his death.  Cunningham apparently told Patrick Corcoran, a grazier and butcher of the district, that he was not well enough to continue doing the work and that he was going away.  During the week before his death, Cunningham was in Burrowa where he spent several days at the Burrowa Hotel.  The hotel-keeper, Thomas Hayes, reported that he was in the hotel from Wednesday [24th October] and planned to go home on Saturday [27th] but was not well enough to do so.  Hayes reported that Cunningham was not drinking to excess – in fact he had been in bed for two days and had very little to drink.  Cunningham then returned to his hut at the Corcoran’s farm sometime on Sunday [28th].

On Monday morning [29th] around 9 a.m. he was seen by a James King who looked after the sheep paddocks.  Cunningham told King that he had pains in the head and was retching, but that his problems had nothing to do with drink, but rather it was a very bad head cold.  About noon the same day, King returned to Cunningham’s hut and found the door fastened from the inside and a rail against it.  He peeped through an opening and saw Cunningham lying down with a gun beside him.  Puzzled by the scene, King left, but returned later with Patrick Corcoran who also saw Cunningham in the same position.  The police were informed.

Senior Sergeant Prior testified that on going to Cunningham’s hut, he found him dead, in a reclining posture near the bunk, resting on some firewood near the fireplace.  A piece of string was fastened to the trigger of a gun and the deceased’s bare right foot was through a loop at one end of the string. The gun had recently been discharged.

Now we get to the grizzly part of Sergeant Prior’s deposition – or the newspaper’s version of it:

He observed portions of the skull scattered about, and a portion hanging by the skin over the forehead; the rafters of the hut over the place where deceased lay were studded with shot; two boxes of caps, one open, were on the bunk; there was a ball of string, corresponding with that fastened to the gun, and a pocket knife with which he had evidently cut the string attached to the trigger; the body was cold and stiff, and death had apparently occurred some hours; there was a great quantity of blood on the floor, and portions of the brain were scattered about.

He had examined the body that morning, and found a wound in the trachea or wind pipe; it was a gun-shot wound, discharged against the trachea; the shot went out at the base of the skull, tearing away portions of the skull and scattering the brains about; from the position of the wound and other particulars given by those who first saw the body, he had no doubt that the wound was self-inflicted, and death must have been instantaneous.

Despite James King’s comment to Patrick Corcoran when they discovered the body the previous day that he “never heard the deceased say he would commit suicide, or make use of any idle talk in that way”, the jury returned a verdict of suicide, but could not say in what condition of mind the deceased was at the time of shooting himself. 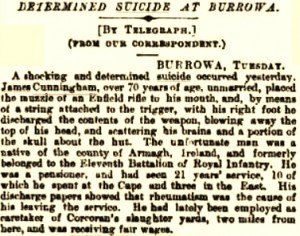 James Cunningham was 70 years old, and probably had an itinerant and lonely life.  Over thirty years earlier he was diagnosed as having chronic rheumatism; he had been in more than his usual pain for at least a week; perhaps enough was enough.