The long and fruitful life of Daniel O’Connell

by Peter Conole
(edited for this site by Diane Oldman)

Daniel O’Connell put on a red coat before he reached his 15th birthday and passed away at the age of 90, ‘ancient of days’ as the saying went in the Victorian Age. The cavalry regiment he joined – the 2nd Dragoon Guards – was very old in world terms. His father had already marked out a path for him.

A Family Tradition
Daniel’s father, John O’Connell, was born in Galway in 1806. In July 1831 he enlisted as a private in the 2nd Dragoon Guards at Leeds in Yorkshire. The regiment did not go overseas until the Crimean War of the 1850s and it moved around Britain in the usual way from one station to another, sometimes being used as an adjunct for ceremonial events or for peace-keeping when local authorities were faced with civil disturbances, such as the Chartist Riots. John held the rank of trumpeter during two periods of his service and had a spotless record; not one military offence against his name and four good conduct medals. John’s life in the military ended in October 1853, when a Regimental Board accepted a medical finding of chronic rheumatism and retired him with a military pension. By then his son Daniel was already something of a veteran in the same regiment.

Two Campaigns
Daniel O’Connell was born at Edinburgh on September 5, 1832 and became a boy trooper of the 2nd Dragoon Guards in July 1847. Like his father Daniel had musical skills and he was made regimental trumpeter in April 1851. He transferred to the 6th Dragoon Guards (the ‘Carabiniers’) in June 1855 and again attained the position of trumpeter. By then the Crimean War was well underway and, although the regiment was at the front, it was not involved in severe fighting. Still, Daniel earned his Crimean War Medal.

Things were very different in the Indian Mutiny and in the course of 1857 Daniel found himself in the thick of very bloody combats. His Indian Mutiny Medal citation lists four battles, the last of which nearly cost him his life. He was badly wounded in the hard-won victory at Delhi on July 22, 1857. A musket ball passed through his thighs, an injury that left him with a permanent left leg limp. After months of rest and recovery in England the army pensioned him off at Chatham on September 7, 1858. 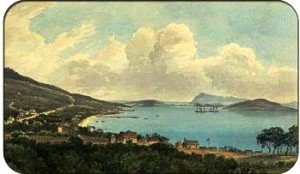 Western Australia and Marriage
Daniel joined the Enrolled Pensioner Force, but we do not know the exact date he arrived in Western Australia or on what ship. He may have travelled directly to Albany, for he married Mary Mooney there on June 11, 1863.

Mary was the daughter of another army veteran, Laurence Mooney, later a respected police officer who served at Albany from the 1840s until 1868. She and Daniel raised a family of three boys and three girls.

A Police Career
Daniel impressed Sub-Inspector William Finlay, officer-in-charge of police in the Albany district, and the latter recommended him for the WA Police Force.  Daniel O’Connell joined as a 2nd Class Constable on September 9, 1865 and served all over the colony, beginning with a lengthy stint in the far south. His early career had its ups and downs and nearly came to a sudden end in August 1867. Daniel was one of a party of four police officers led by Constable George Chester that tried to apprehend two notorious and violent outlaws, William Graham and Thomas Scott. Chester and company tracked the pair down but bungled an attempt at capture and were suspended. However, Chester had been in charge and gave the orders, so he was the only one dismissed.

In March 1868 Daniel was made the first officer-in-charge of the newly opened Mount Barker Police Station and remained there under rugged and difficult working conditions for years. In August 1872 an accusation of being under the influence of alcohol resulted in a reprimand and his transfer back to Albany. In 1876 he was serving in Fremantle at the time of the famous ‘Catalpa’ episode, the escape by sea of a number of Fenian political prisoners. Daniel O’Connell was tasked with going to Rockingham to find and take into custody the vehicles and horses used by the departing Fenians. 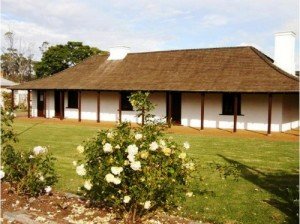 Daniel weathered these storms and rose steadily through the ranks: 1st Class Constable in 1871; Corporal in 1874; Sergeant in 1883. He also earned no less than 11 rewards and commendations for courage, intelligence and efficiency in the line of duty. For example, he arrested three robbers in 1872, broke up another gang of thieves in 1880 and put sly grog sellers out of business on more than one occasion.

Promotion
Daniel’s glory years were soon to come. He was commissioned as a Sub-Inspector on January 1, 1893 and placed in charge of the Eastern District, the command centre being York, later Northam. His energy and devotion to duty were shown to great advantage during the chaos of the early years of the Gold Rush. An attempt was made to police the fields from York itself, which made life unbearably difficult for the police. Vast distances had to be travelled and Daniel found it impossible to supervise so large a jurisdiction from the quiet, civilised Avon valley. Out of necessity he moved to the Goldfields himself in April 1894, taking his chances among the younger officers in those rough times, which gives one pause for thought because he was well past the age 60.

Living and working conditions for Daniel O’Connell and his men were truly atrocious and hazardous. But these early efforts to maintain the peace were successful and he was able to move back to the Avon valley when separate police districts were established for the Goldfields in March 1895. Daniel was at Northam in 1897 when he received the Jubilee Medal commemorating the 60th year of Queen Victoria’s reign. 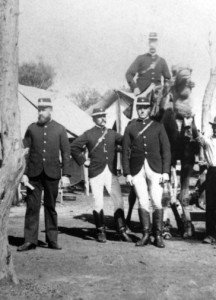 Trouble on the Goldfields
However, he had not seen the last of the Goldfields. Bitter disputes between mining companies and prospectors who searched for alluvial gold led to serious trouble. Inspector Charles Newland of Kalgoorlie called for support from other police districts and Daniel – now in his late 60s – moved east from Northam with his men in response. Thousands of miners headed into Kalgoorlie in November 1899 to try and rescue colleagues who had been taken into custody during an earlier show of force. They placed the police station under virtual siege. The police were well armed and stood their ground amid a shower of stones, bottles and other missiles. Inspector Newland issued firm but reasonable warnings to the mob, ordered a couple of arrests and managed to persuade the rioters to disperse and settle matters by negotiation. He and Daniel featured (left) in a fine group photograph of participating officers that was taken after the end of the crisis. 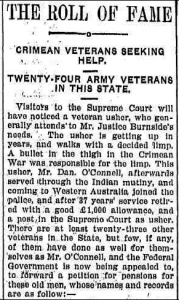 Retirement
Daniel O’Connell retired as an Acting Inspector on December 13, 1901. He received a good pension for his services and was honoured with the dignified new position of usher to judges of the Supreme Court in Perth. As late as 1907, when he reached the age of 75, Daniel held that post when the local press drew attention to dozens of old army veterans who were quietly living out their lives within the WA community.

Daniel had many years left to observe the passing scene, witness the increase in the number of his descendants in WA and doubtless fret about some horrors of the new century. He died at Highgate Hill in Perth on November 29, 1922.