Sub-title: ‘Don’t Believe All You Read in the Newspapers’.

The Story of James Whiteside

In early June 2013 I was trawling TROVE – that wonderful FREE resource provided by the National Library of Australia. It has digitised newspapers from all over Australia, but I was only interested in the WA selection – 28 newspapers in all, starting with the Perth Gazette in 1833 right up to the West Australian of 1954 and all the ‘regionals’ as well. I was looking for articles, obituaries, photographs, family notices etc. for my Crimean War Veterans project.  I was certainly able to find some interesting material. 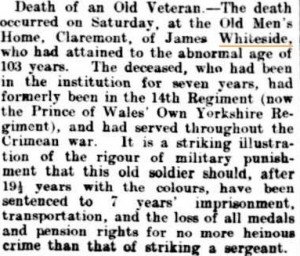 One notice in the West Australian dated 11 Jan 1909 that caught my eye was a report on the death of a James Whiteside.  Apparently he died in the Old Men’s Home in Claremont aged 103. He was reported as serving in the 14th Regiment during the Crimean War. He arrived on a convict ship having been sentenced to seven years for striking a sergeant. He was ‘with the colours’ for 19½ years but lost his pension and his medals for his crime.  I was quite excited about this – I already had several convicts who were veterans of the Crimean War, easily found when they were court martialled in places like Sevastopol or Scutari; their crimes and sentences can be checked in the AJCP microfilm of WO90 General Courts Martial Registers Abroad. Records of soldiers going to trial in England are also easy to spot because their sentences relate to Army disciplinary matters. However, they do not have a regiment number recorded which makes them difficult to identify in other records.  Findmypast.com, the genealogical database, has indexed and provided images for WO97 Chelsea Pension records of soldiers discharged to pension for service, injury or medical reasons, but there are no records for convicts who lost their entitlement to an Army pension – unless they were discharged prior to a civil offence.  It has also been said that a convict’s Army medals had to be relinquished – but this is not the usual case. This was occasionally part of the sentence of a military court, but only occasionally.   The only way of confirming this is via an annotation on the medal roll and I have never sighted such an annotation.

I decided to check out this newspaper report and the man behind it.  I first checked the death date of a James Whiteside in the WA Death Indexes online.  Sure enough, there was just one James Whiteside who died in 1909, but no age at death recorded.  I then moved on to the ships’ lists of convicts on the DPS (Dead Persons Society) website.  There was only one James Whiteside who arrived on the Lord Raglan on 1 Jun 1858. He was a 33-year old unmarried tailor who had gone to trial in Liverpool in 1856 for burglary and was sentenced to eight years with transportation. This would have made him 84 when he died; a good age but far short of 103. I was even able to get a physical description of him from DPS – 5’ 7¾” tall, dark brown hair, light hazel eyes, full pockmarked face with sallow complexion, middling stout build. Surely the newspaper couldn’t have got it that wrong – there must be another James Whiteside somewhere.  I then checked the Rica Erickson/Gillian O’Mara book Convicts in Western Australia 1850-1887; it’s in our local family  history library.  It didn’t offer me another James Whiteside, but it did add to the information about the Whiteside on DPS. He was an illiterate Protestant with previous convictions and the entry gave details of his ticket of leave (1861) and pardon (1863). I even checked the WA Passenger Arrivals 1839-1890 in case another JW had sneaked into the Colony; same story – only the one convict.

Next I checked out the claim that JW was a Crimean War veteran.  The first thing I checked was whether or not the 14th Regiment was engaged in the war – it was. I assumed there would be no pension documents for him on the Findmypast database, but I checked anyway. Then I checked the 14th Regiment medal rolls on ancestry.co.uk.  No mention of a James Whiteside in the 14th Regiment – and every man received at least the Crimean War Medal (275,000 of them were issued).  Ancestry.com, the online database providing medal roll indices and images, sometimes makes mistakes in its transcriptions, so I double checked against the CD-ROM of the medal rolls – nothing there either. I might have considered that a JW was sent to another colony as a convict and came to WA later, but all others had stopped transportation before the Crimean War had started. By now the newspaper story about Mr Whiteside is looking exceedingly dodgy. 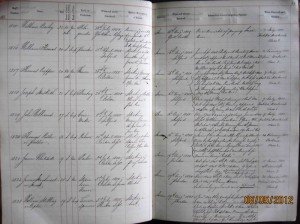 Time to call in the big guns.  Bevan Carter (former WA Genealogical Society President) has scanned copies of all kinds of prison records and is very amenable to sharing them.  He found James Whiteside’s record in Wakefield Prison [HO 23-15].  Prisoner #1521, aged 19, single, unable to read or write, a tailor.  Convicted on 3 Jul 1850 at Preston Sessions for stealing a pair of shoes.  He was sentenced to seven years at Salford on 19 Aug 1850. It was recorded that JW had prior convictions in October 1845 where he was put into solitary and whipped and again in September 1848 and April 1849.  He was described as ‘extremely ignorant and depraved’. He was removed to Shorncliffe Prison on 10 Jul 1851. Huh, I thought, if he did a seven-year stretch, then he was banged up in prison for the entire period of the Crimean War.  And it seems probable that he wasn’t in the Army at all!

I wondered who had given this information to the West Australian newspaper.  Some grandchild perhaps who did not know that JW had come to WA as a convict and had listened to his tall tales. I can’t really blame him for wanting to reinvent his convict past.  But it surely leads family history researchers up the garden path.  Satisfied that the death notice was rubbish, I recorded JW as one of my growing list of ‘false claims’ to involvement in the Crimean War. 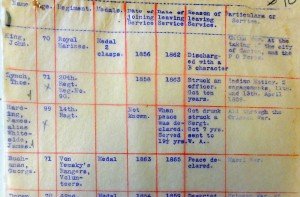 Weeks went by, and then I received an email from a Peter Lutley of the SAS Historical Research Centre. He had been researching Colonel Joseph Alexander Campbell for whom the Campbell Barracks, HQ of the SAS in Swanbourne, WA had been named. Peter came across a file in the State Records Office [Cons 752] which he thought would be of interest to me.  Apparently in 1906, HM Indian Government offered pensions to any survivors of the Indian Mutiny who were in old people’s homes and asylums in the care of the WA Colonial Government.  How Campbell became involved in this isn’t clear, but word went out and lists of veterans in care were sent to the Colonial Secretary’s Department.  How and why these lists ultimately included veterans of not only the Indian Mutiny but the Crimean, Maori, China, Egypt and even Boer wars is also a mystery; perhaps never miss an opportunity to reimburse the government’s coffers.  From my point of view it added ten more people (most of them convicts) to my Crimean War Veterans’ database.  But what caused me great consternation was the name of James Whiteside.  You can see from the image of an extract of the list that he is recorded with much the same detail as the death notice.

Exaggerated claims in the newspapers are one thing, but in official government records too?  I noticed that the aka of Harding appeared on his record (third down) and that the record did not include his regimental number (most did), nor did it include a date of joining or leaving the service. However, it did confirm the newspaper report of 19½ years’ service, his crime of striking a sergeant and that he served ‘all through the Crimean War’.

I sent the information to Bevan Carter and in response received even more prison records for this man. He was moved from Wakefield (1850), to Shorncliffe (1851) to Stirling Castle (1852) to York (1852) and finally to Dartmoor in October 1852. And we think the criminal justice system is costly today!  The return of prisoners confined in Dartmoor as at 31 Mar 1856 definitely includes Whiteside but with a note in the remarks column ‘License 4 March ‘56’. Bevan tells me that this means he was out on parole. 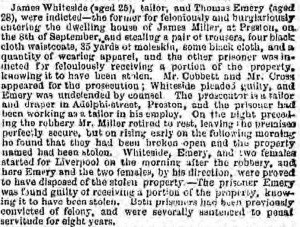 Trial reported in Liverpool Weekly Mercury 13 Dec 1856
Slow learner that he was, James Whiteside was back on his home patch when he was convicted for the fifth time. In the early hours of 8 Sep 1856, he broke into the premises of his employer, James Miller, Adelphi Street, Preston.  He stole a pair of trousers, four black cloth waistcoats, 35 yards of moleskin, some black cloth and a quantity of wearing apparel.  Whiteside, two females and a Thomas Emery left for Liverpool the morning after the robbery – and were eventually arrested.  Both men appeared before the Liverpool Winter Assizes on 6th December – Whiteside for burglary and Emery for receiving stolen goods.  Both had previous convictions and were sentenced to penal servitude for eight years. I found reports of the trial in several newspapers: theLiverpool Weekly Mercury, the Manchester Courier and Lancashire General Advertiser and the Blackburn Standard.

Whiteside went back into Wakefield Prison and was transferred to Chatham Prison in November 1857. He boarded the Lord Raglan at Chatham on 19 Feb 1858. His partner-in-crime, Thomas Emery, arrived in WA on the Sultana in 1859.

I found Whiteside in Wakefield Prison in the 1851 Census where his occupation was described as a journeyman tailor. It seems a pity that this young man who, at the age of 11 was working in a cotton factory (1841 Census) and managed to get through an apprenticeship to become an artisan, should have found it necessary to get on the wrong side of the law so frequently.

The lesson here is that we shouldn’t believe everything we read in the newspapers, or even what we find in government records!

Post Script: James Whiteside is one of many ‘invalid’ claims to Crimean War service which have appeared in Western Australian newsprint and other publications; however, he is the first convict I have found to make false representation.  As time permits I will continue to view records of all the convict ships arriving in Fremantle during and after the Crimean War; the objective is to identify all those convicts who committed a ‘military crime’ (desertion, striking an officer, insubordination, mutinous conduct etc.). These arrivals will then be matched against the transportation registers, courts martial records and medal rolls in an attempt to place these men in military service in the Crimean War.  This is painstaking work, but to date I have found 38 convicts who saw Crimean War service (excluding, of course, Mr Whiteside!).