How Tom Grady Cleared the Gun


We have read of deeds of daring done for dear Old England’s sake,
Of the glorious death of Nelson, or the pluck of gallant Drake;
Of Wellington and duty we have often talked before,
And the schoolboy knows the story of Moore;
Still ring from Heights of Abraham, Wolfe’s dying words – “They fly!”
Words just as fresh to-day as then. Such memories never die.
Then the names of Clive and Campbell, of Havelock, Lawrence, Neill,
Remind us but of victories won by British pluck and steel.

The world was taught how heroes die when the Birkenhead went down,
And on those Balaclava slopes, of Light Brigade renown,
That ride into the jaws of death filled Europe with amaze;
Subject for painter’s canvas—fit theme for poet’s     praise!
Now, comrades, I’ll tell ye a story; ‘tis not of victory won,
But the deed of a lowly private, yet a deed right nobly done;
How, face to face with death he stood, unaided and alone,
And we claim him as a comrade; he was one of the old King’s Own.

‘Twas a bleak October morning, and the British forces lay
Entrenched round grim Sebastopol, with the Russians held at bay.
Cold, hunger, fever, wounds and death had thinned that gallant band;
Yet once again, ‘mid frost and snow, those gunners take their stand.
From the early grey of morning, till the day fades into night,
For weary months those gunners had stood steadfast in the fight.
With fusillade of shot and shell the fortress answered back,
As the thunder of our batteries rolled along the left attack.

But of all those guns that volley forth along the British line,
None speak so sharp, or speak so true as gallant Number Nine.
Oft had the foeman marked this gun; its frequent battery smoke;
This morn a Russian chieftain to his willing gunners spoke:-
“Bring your guns to bear together on  that hornet over there;
That British bulldog barks too loud, bring four or five to bear.”
So Number Nine stands silent now, and answereth not at all,
Helpless, with choked embrasure and broken battery wall;
All torn and rent with Russian shell, the pride of the left attack
Is useless now in the British line and sends no answer back.
Yet now one notes its silence; a chief there in command,
And, turning to the gunners, says, “Come, lads, who’ll bear a hand,
Who’ll clear the gun?” he cries aloud; but the bravest hold their breath;
Full well they know those words imply a task of life or death.
“Who’ll clear the gun, I say? He cries a second time;
Then one stands forth, no gunner he, but a private of the line.

So, silent, face to face with death, he mounts the battery slope;
He springs up single-handed with those Russian guns to cope.
With his own stout heart and willing hand, a pickaxe and a spade-
A breech in the shapeless battery wall he very soon hath made.
Now he grasps his spade in a firmer grip, and his pick deals a heavier blow,
For every moment his last may be – he works under fire from the foe;
Five minutes more – and the battery stands all shapely, firm, and sound.
And he leaps back safe, whilst Number Nine hurls forth her hindered round.
“Right nobly done”, cries Lushington, as the hero’s hand he rings,
“Your name, and corps?” “I’m Grady, sir – Tom Grady, Fourth o’ King’s!”

By many a Christmas fireside bright this tale was told I ween;
It was told in the cot of the lowly, it was told to England’s Queen.
Aye! Told to the Queen he served so well; and it was not told in vain,
For she pinned on his breast that priceless gift – the Cross which bears her name.

I’ve read the Regiment’s story, it leaves turned o’er and o’er;
But Tom’s is the Bravest deed I find in the records of our corps;
So, when ye hear folks talk of heroes, or a deed of daring done,
Tell this, your Regiment’s Story – How Tom Grady cleared the gun.

Courtesy of the King’s Own Museum. 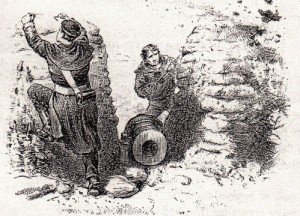