The Sad Story of Edmond Goodall

An initial story posted on this website of ‘Edward Goodall’ was flawed in a number of ways – his WO97 Chelsea Pension discharge papers are available AND his forename turns out to be Edmond, not Edward! How did I come by this? I have recently been alerted to a publication which appeared  in March 2016 (6), sometime after my original posting. As it turns out, Edmond was telling some untruths about his involvement in the Crimean War, if indeed he was quoted accurately in the newspaper serial (2) about his service in that war. His regiment, the 80th was NOT involved in that campaign and was ‘at home’ throughout. Edmond’s overseas service included New South Wales and India, but NOT the Crimea. After his discharge in 1856, Edmond came to Western Australia with the Enrolled Pensioner Force on Lincelles, arriving 28 Jan 1862 (6).

Drunk
References found of Goodall in the Colony were alcohol related and on each occasion he was fined five shillings, plus five shillings fees (1).
14th May 1862 – charged with being drunk in a public street.
17th July 1862 – drunk and using obscene language.
1st August 1862 – drunk.

Detached
In May 1864, an exploration team of nine left Fremantle for Roebuck Bay on the Flying Foam to establish a pastoral concern in the Northwest for investors, headed up by members of the Burges family. Those on board included James Harding (manager), Lockier Clere Burges junior (second in command), Frederick Panter (inspector of police), William Goldwyer (police constable), John Vincent and four labourers/station hands (2). Harding, Panter and Goldwyer struck out on their own to look for suitable land for running sheep, promising Lockier Burges to return in two weeks.

On 16th February 1865 the Clarence Packet left Fremantle bound for Roebuck Bay. The passengers included Edmond Goodall, one of a detachment of four ‘pensioners’ and a Corporal. The newly appointed Resident Magistrate, Joseph Logue, also on board, was instructed that the pensioners were to assist in the protection of the Station and that a search for Messrs Harding, Panter and Goldwyer, missing since November 1864 was to be instituted (3). The search party was also on the Clarence Packet and comprised Mr Maitland Brown, Mr J Keld (Navigator), Police Constables Robert Toovey and Robert Williams and three natives – Dougall, Tommy and Johnny (4). In the event, the detachment of pensioners: Corporal William Whittle, and privates Goodall, Davis, Jarvis and Farrell were never part of the search party. The cargo of 325 sheep were intended for the pastoral company of which the missing Harding was manager. Lockier Burges joined the search party which finally found the bodies of the missing men. 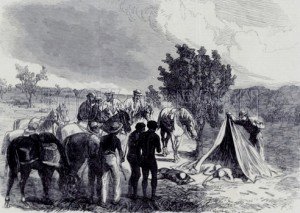 Finding the Remains of the Lost Explorers [Illustrated London News 7 Oct 1865]
After Burges’ return to Depot Camp at Roebuck Bay, there were concerns about a missing shepherd by the name of Bell. Burges selected Edmond Goodall to be part of this search party and described him in his book which was serialised in the Sunday Times (2). Click here for Part VI of this serial to discover Goodall’s alleged service in the Crimean War. 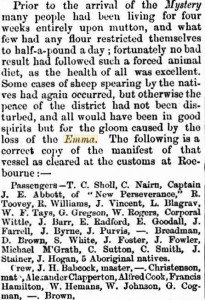 Drowned
By 1866 the number of pensioners had increased from the original five to seven and was ‘now engaged in upholding the authority of the local magistrate …….’ (5). Indeed the interaction between settlers and the surrounding tribes of Aborigines had become fractious. Then in 1867 the detachment was recalled to Fremantle and the seven pensioners boarded the coaster Emma at Port Walcott on 3rd March. A total of 42 souls were never heard of again.

It is a pity Goodall was not a Crimean War Veteran, but he played his part at an interesting time in the development of Western Australia’s north. Edmond Goodall has now been consigned to one of the Invalid Claims , but his story remains a good one.

Thanks go to Jeanette Lee, Peter Conole  and Sue Baddeley who helped locate some of the above sources.