Distinguishing between common names in records is always difficult and no less so in the British Army records. Generally, without a matching regiment it can be game over for the John Kellys, the Patrick Sullivans, the John Smiths and the William Joneses of whom I have made this case study. 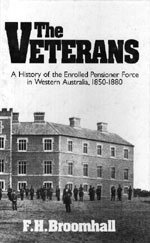 The majority of Crimean War veterans who came to Western Australia arrived as part of the Enrolled Pensioner Force guarding the transported convicts. The ‘bible’ of such men is The Veterans, A History of the Enrolled Pensioner Force in Western Australia, 1850-1880 by F H Broomhall.  Broomhall’s own research for the book was reliable; he made more than one trip to the Military Search Room of Public Record Office in London (now TNA). He made use of the Australian Joint Copying Project (AJCP) and other material available in the Western Australian State Archives, and had access to the records of the General Registrar’s Office of births, marriages and deaths, as well as police and court records. In this way Broomhall was able to publish the name, regiment and rank of each man and landmarks of his life in WA. My starting point for a profile of William Jones was therefore Broomhall’s entry in The Veterans.

The Veterans page B150
William Jones Private 1st Rifle Brigade @ 1/- per diem. Arrived Belgravia 1866. ‘Holder of Crimea and Turkish Crimea medals’ is referenced.
William Jones arrived William Jardine 1853 (no regiment given but summary of military history).
William Jones William Jardine is too early for the Crimean War but I noted him for further research conflicts.

WO97 Chelsea Pension from Findmypast
3,154 hits. Filtered by Rifle Brigade but did not find my man immediately. Eventually found him in the unindexed ‘Depot’. Page 1 indicates soldier number, service in Crimea and clasp for Sevastopol.  Page 4 has a notation referencing Enrolled Pensioner Force Western Australia.

Birth date recorded as 1830.
Birthplace recorded as Guilford, Devon.  Problem: cannot find this town/parish in Devon. I discovered a village named Gilford in County Down, Ireland – could this have been his birthplace? It would not be the first time ‘Down’ has been read as ‘Devon’ and vice versa. 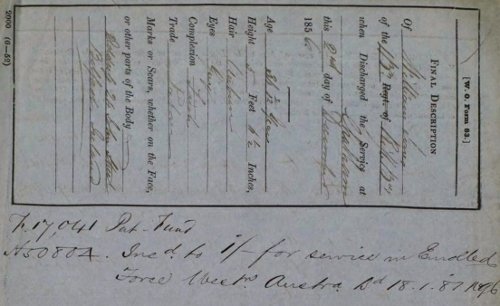 WO100-33 Crimean War Medal Rolls
I filtered by Rifle Brigade – four hits for four different soldier numbers. One of them matched the soldier number for my man; this completed corroboration for service in the Crimean War.

Welcome Wall, Fremantle
This Wall of information at the Port of Fremantle about immigrants contributed by their descendants can be useful but often inaccurate.  Panel 58 recorded the arrival of William Jones, his wife ‘Mary’ and three daughters; William’s birthplace as Kings County, Ireland (anomaly); military service in the Crimea and India (anomaly); the family lived in the Army Barracks in Fremantle and they had another five children (anomaly). William Jones’ Army career began in the Crimea and ended in 1856 with a period of imprisonment for a felony in England in late 1855; no opportunity for service in India.

Birth Records in Western Australia
I found birth registrations of seven children to a William Jones and Mary Young between 1868 and 1885, giving a total of ten children (not a total of eight as indicated on the Welcome Wall).

I now tentatively had the maiden name of William Jones’ wife.

Marriage and Birth Records in Ireland
William Jones was discharged from the Army in 1856 with an intended residence in Belfast.  I therefore checked marriage and birth civil registrations in that registration district for a marriage to Mary Young and the three children born outside Australia. Indistinguishable.

Marriage and Birth Records in England
I searched for a marriage in the civil registration records for a marriage of Mary Young cross-matched to William Jones. There were about 80 possibilities from 1856 to 1859 but none cross-matched.  The births of the three children were indistinguishable because the names of father and mother are not recorded in the indexes.

Article in the EPG Gazette
The EPG Gazette is the quarterly newsletter of the Enrolled Pensioner Guard Special Interest Group of the WA Genealogical Society.  In the October 2011 edition I discovered an article written by a descendant of William Jones.  Unfortunately a number of anomalies occurred in the narrative which did not fit other information.  Most anomalies stemmed from information recorded on the death index dated 1899 in the name of William Stewart Jones.

Death, Burial and Probate Records
The WA General Registrar’s Death Index was bound to throw up a good many indistinguishable names and indeed it did.  I selected a date range between 1883 (conception of youngest child) to 1920 (when he would have reached 90 years old, based on a birth year of 1830).  I got 50 ‘hits’. Of course many could be eliminated from age at death but unfortunately almost 50% of the records did not state age at death. Many recorded a second initial or name and as I had never seen William Jones recorded with a second given name in my material perhaps one could (cautiously) eliminate these. One of these was William Stewart Jones (see EPG Gazette reference) whose date of death did not tally with William Jones’ date of birth by a discrepancy of eleven years.

I found a death recorded for 1897 aged 67 which matched William’s birth year.  I also found a record in St John’s Church, Fremantle in November 1897 which corroborated this information. We can assume William Jones was alive in June of 1897 as he attended the Queen’s Jubilee Banquet (Broomhall).

I also found a William Jones who had been born in Anglesey, as was the William Jones of the William Jardinearrival (Broomhall). But even this record was a coincidence of two WJ’s in the Colony being born in the same place … but of a completely different generation.

A search for probate records from 1897 to 1929 (although I doubt William had 99 candles on his last birthday cake!) presented a result of eight probated wills or administrations.  There was nothing for 1897; in 1899 a William Jones’ will was probated, but he was a Kalgoorlie man, not a Fremantle resident.

Summary of Indistinguishables and Anomalies
Where was William Jones born and baptised?
Where and when did he marry Mary Young?
Where and when were their first three children born?
When did William Jones die?
Note:  it is outside my financial capacity to purchase birth, marriage and death certificates.

Where to from here?
If anyone has proven answers to these questions, please use the Contact page to get in touch with me.

In the meantime, I will be chasing up detailed information about that felony in Maidstone, Kent.

Postscript (May 2014):
Elizabeth Finn, a very helpful officer from Kent History and Library Centre responded to my query about William Jones’ felony in Maidstone, Kent, as follows:
I’m afraid that I have not been able to find the records of this case. First I checked the calendar of prisoners for the County Quarter Sessions (document reference: Q/SMc/W1) and then, when I could find no reference to William Jones there, the Gaol Calendars (Md/JQg/9) and formal minutes of the Court in Session (Md/JQr1/1) for the Maidstone Borough Quarter Sessions but he was not listed there either. Interestingly, both the courts met in July and October 1855, but not in September. Finally, I checked the convictions (PS/Md/Sm/3) and (PS/Md/Sc/2) for Maidstone Petty Sessions, but although that court met on 14 September 1855 there was no mention of William Jones.