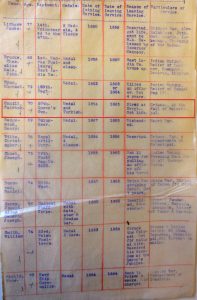 Extract from Campbell’s List [Cons 752 1919/2479, WA SRO]
In 2013 I received an email from a Peter Lutley of the SAS Historical Research Centre. He had been researching Colonel Joseph Alexander Campbell for whom the Campbell Barracks, HQ of the SAS in Swanbourne, WA had been named. Peter came across a file in the WA State Records Office [Cons 752 Item 1919-2479] which he thought would be of interest to me. Apparently in 1906, HM Indian Government offered pensions to any survivors of the Indian Mutiny who were in old people’s homes and asylums in the care of the WA Colonial Government. How Campbell became involved in this isn’t clear, but word went out and lists of veterans in care were sent to the Colonial Secretary’s Department. How and why these lists ultimately included veterans of not only the Indian Mutiny but the Crimean, Maori, China, Egypt and even Boer wars is also a mystery; perhaps never miss an opportunity to reimburse the government’s coffers. From my point of view it added ten more people (most of them convicts) to my Crimean War Veterans’ database.

Patrick Cahill was on Campbell’s list and, as can be seen, there is a claim that he took part in the Crimean War with a medal and clasp for Sebastopol and the Turkish Medal. We shall see.

Cahill was born c.1836 in Ireland, but owing to his common surname, the National Library of Ireland’s Roman Catholic baptism register archives offer up 14 baptismal records between 1835 and 1837 with the forename Patrick or the Latin form Patricius; half of these in County Cork. This assumes Patrick Cahill was of the Catholic persuasion – there is some evidence he converted to Protestantism in adult life. Sometime after 1851 (he does not appear in the 1851 Muster) Cahill enlisted in the British Army: the 50th (Queens Own) Regiment of Foot.

After fighting in the First Sikh War (Sutlej Campain), the regiment returned home in 1848. On the outbreak of the Russian War, the 50th was sent to the Crimea with Sir Richard England’s division. It fought at the Alma and at Inkerman and throughout the siege of Sebastopol. It is believed that it was the last regiment to march out of Sevastopol on the evacuation of the Crimea. Our Cahill’s name does not appear on the medal roll for the 50th, the only Patrick Cahill on the roll is Private #3938 “died on 28th November 1854”.

District Court Martial 1857 [WO86-009-86]
In June 1857, the 50th proceeded to Ceylon, replacing a regiment that had been moved to Bengal at the beginning of the Indian Mutiny. The regiment remained in Ceylon until 1863 when it was sent to New Zealand and served until 1869 throughout the Maori Wars.

The first reference to Patrick we find is on 15 July 1857. He was tried at a District Court Martial in Colchester, Essex with being absent, for which he was sentenced 112 days with hard labour and stoppages [WO86-009-86].

Colchester Garrison experienced rapid expansion during the Crimean War. Between 1855 and 1856 wooden infantry barracks for 5,000 troops were erected on Ordnance Field. The government purchased 167-acre Middlewick Farm for use as a training area and a rifle range in 1857. Middlewick Ranges are still in use by the present garrison.

Cahill was detained in Colchester for the period of his sentence and thus was not with the regiment when it was sent to Ceylon. This may even suggest he joined the regiment after June 1857 and would explain why he is missing from the Crimea War Medal roll. Nonetheless, he was with the 50th for the 1861 Muster when he is recorded as Private #4321 in Ceylon [WO12-6154].

On Cahill’s next appearance in the records, he has been tried and sentenced at a General Court Martial in Colombo, Ceylon. A GCM deals with serious military crimes and Cahill faced one on 11 September 1862 for firing his rifle into a storeroom with intent to grieviously harm a Colour Sergeant. He was sentenced to life, penal servitude.

Cahill was incarcerated in Colombo and on board the ship ‘Louisa’ to England for over seven months, followed by Millbank and Chatham prisons for a period of almost 14 months. By the time he reached Western Australia, he had been detained for exactly two years.

Most of the notations in prison registers are meaningless to all but the authorities of 150 years ago. However, some useful information can be gleaned:
* Patrick Cahill was 26 and single in 1862.
* His literacy was noted as ‘imperfect’.
* His brother’s name was Denis McGrath of Kilberury (?), Tipperary.
* His religion was recorded as Roman Catholic but changed to Protestant.
* And there are slight differences in physical description between Chatham Prison and Fremantle Prison records. 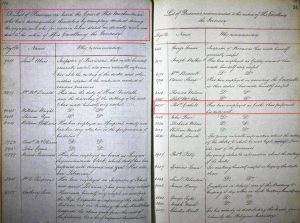 Patrick Cahill’s last prison in England was Chatham. Merchantman, under the command of Captain William Gardiner left Gravesend on 13 June 1864 and picked up the Chatham prisoners the following day. Thus Patrick and 68 other men from Chatham prison were on board their transport to Fremantle for over two weeks while she sailed to Portsmouth and Portland picking up more convicts on the way. Over 260 men eventually left Britain on this journey; ten of them were soldiers sentenced at General Courts Martial for various crimes.

Cahill was recorded as #61 on the ship’s register list of convicts. And was among a number of prisoners recommended to his Excellency the Governor for exemplary conduct during the voyage when he was employed as cook. This recommendation in the Surgeon’s Journal is recorded under his Chatham Prison register number.

Cahill and his fellow prisoners were allocated yet another number, this time in the Convict Establishment (Fremantle Prison) system. His week to week activities are recorded under this number (7968) as we discover his employment and offences history in the system (see sidebar).

It can be seen from his Fremantle prison record that he gained his ticket of leave in April 1868 and from that point was gainfully employed (albeit with lapses in behaviour) primarily in the Wellington and Sussex Districts. There are several mentions of ‘Bunbury Depot’ in his record. The Bunbury Convict Depot is described in the Convict Comptroller General’s final Memorandum of Work in 1862 as: A Depot for 120 men, cook-house, bake-house, store, ablution room, workshops, and offices, as also all necessary out–buildings, all enclosed with a boundary wall and gates; quarters for two warders, commissariat store, with quarters and office, hospital, and the required out-buildings, have been erected; also 13 cottages for pensioners, court-house, retiring room, and quarters for one policeman.

During 1872 Patrick Cahill was employed at Parkfield (Wellington District) by a Mr R G Rose. After working in other parts of the district, he returned to Mr Rose’s employ in January 1874 for six months; this was followed by employment with Mr J Milligan of Australind. This was undoubtedly where and when he met Sarah Woodley; they were married in Bunbury in 1875. Sarah was the eldest child of Charles and Emma Woodley nee Gardiner born in 1856. Charles had come to Western Australia on the convict ship Pyrenees in 1851 to serve a sentence of seven years for fraud, leaving a wife and child in England. Charles received his ticket of leave and conditional pardon before Sarah was born.

Patrick and Sarah had nine children, although three died as infants. Patrick continued to work in the Wellington District at least until his youngest child, Lily Ada was born in Bunbury.

Patrick Cahill was an inmate of the Claremont Old Men’s Home when Campbell undertook his survey of war veterans. However, the Home had only recently opened its doors at that time and I am guessing that Patrick was one who transferred from the Mt Eliza Depot as there is no record of his admission to Claremont. He died in 1919 and was buried in the Roman Catholic section of Karrakatta Cemetery – despite his alleged conversion per the Millbank Prison record. Sarah (Woodley) Cahill died in 1927 at their son Charles’s home in Wickham Street and was buried in the Church of Christ section of Karrakatta Cemetery. 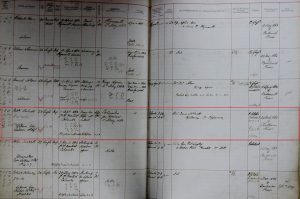 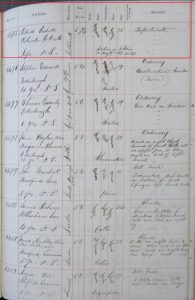 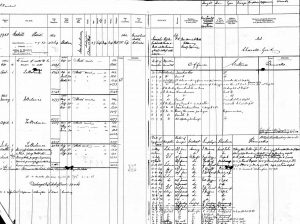