Joseph Pickering and his orphan-wife, Mary 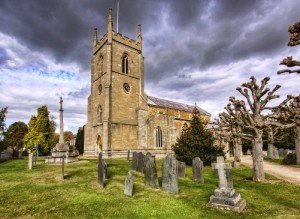 Joseph Pickering Senior and Lucy Bale were married in Kibworth Beauchamp, Leicester, England in November 1821. They had at least six children; Joseph and his brother George being baptised on the same day – 24 Oct 1824 in Kibworth Church. Joseph senior was a wool comber by occupation and the 1841 shows that sons Joseph and George followed in his footsteps. At 15, Sarah, the eldest girl, was employed as a worsted spinner; Kibworth’s occupations in the 19th century were in framework knitting with a burgeoning hosiery industry.

Joseph Pickering’s Army Career
Joseph Pickering junior was 17½ when he joined the 1st Battalion (Prince Consort’s Own) Rifle Brigade of the British Army in May 1842 and served for the next 21 years.  His military pension was awarded for long service as there is no indication that he suffered from any kind of war wounds or medical conditions. Joseph spent almost ten years of Army life overseas. He served with the regiment at Corfu in the Ionian Islands and proceeded to the Cape in 1847.

Joseph spent 5½ years in South Africa fighting in the Kaffir War of 1847-48 and engaged with the insurgent Dutch Boers at Boem Plaats. The regiment returned to England in 1850 but was back at the Cape taking part in the second Kaffir War of 1852-53. Joseph’s regiment had not long returned to England when it embarked for Varna where it was attached to the Fourth Division.

Joseph saw service at Alma, Balaclava, Inkerman and the Siege of Sevastopol and is recorded with all four clasps for his Crimea War Medal. Men of the Rifle Brigade won more Victoria Cross medals than any other regiment during the Crimean War. The 1st Battalion was at home for the Indian Mutiny, but went to Canada at the time of the Trent Affair (1861) and it was in Hamilton, Ontario that Joseph received his discharge. He then returned home to Kibworth.  Although no record of a marriage has been found, it is likely that sometime between 1864 and April 1866, Joseph married Lucy Bale.  Thus we have a second generation of a marriage between a Joseph Pickering and Lucy Bale.

To Western Australia
Joseph and Lucy Pickering came to Fremantle, Western Australia on the convict ship Belgravia, which left Portland, England on the 17 Apr 1866 arriving in Fremantle on the 4th July.  The Pickerings were on the ship with 29 other enrolled pensioner guards plus their families but the passenger list shows no mention of Lucy.

The couple had four children born in Fremantle between 1867 and 1874. Sarah, Lucy Harriet and Elizabeth all died in infancy, but Joseph William survived until he was six years old.  Lucy Pickering died in March 1876 of ‘debility after confinement’ and young Joseph William, with no mother to care for him, was placed in the Fremantle Convent.

Joseph’s Second Family
After Lucy Pickering’s death, Joseph ‘retrieved’ both his own child Joseph William and, according to some sources, an orphan named Mary Carroll, from the Convent.  Joseph the 52 year-old widower married Mary Carroll in April 1876 and for a brief four years she became step-mother to Joseph William.  The 18-year old Mary soon produced a brood of her own, although sadly the first was stillborn and the next died in infancy. Joseph William, Lucy Pickering’s child, died in 1880 aged six, but Mary’s third child born the same year was named for him and lived to be over 80 years old. Florence May, a second Stephen, Hilda Mary Catherine and Lucy came along between 1882 and 1891 and lived to adulthood.  However, the next three children: George, Henry Ernest George and John Walter Frederic died as infants. 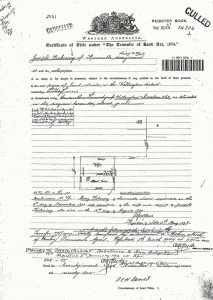 Land Grant and Purchase
Joseph applied for and was granted a one-acre Fremantle Town Lot P89 on 10 Nov 1884. He also purchased a portion of Location 263 at Wellington and is described in the Title as ‘dairyman’. He has also been recorded as promoted to Sergeant in charge of Fremantle Gaol (Erickson) but is not listed as a warder in David J. Barker’s Dictionary.  He certainly retired from the Enrolled Pensioner Force prior to November 1880 when it became the Enrolled Guard recruited from the available Army pensioners to be under the orders of the Superintendent of Police.

Joseph died on 18 Aug 1897. He had provided for his family in a will dated 28 Jan 1893 plus a codicil. Mary Pickering was the executor and probate was granted on 25 Oct 1897.  It transpires that there were five cottages on the Fremantle Town location at Parry Street and Queens Square which Joseph left to his five surviving children.  The codicil related to vacant land at the back of these cottages which he left to his wife Mary, together with the remaining 20 acres of land and cattle at Wellington.  Joseph’s estate was valued at assets of £2,878 10s. and liabilities of £953 4s. 6d.

It was appropriate that Joseph was able to attend the banquet for Enrolled Pensioner Force survivors held in Perth as part of Queen Victoria’s Diamond Jubilee celebrations just two months before his death. Few would have seen as much military service as Joseph.

Mary Pickering nee Carroll was only 41 when Joseph died.  She married again in 1899; she and Dennis Baldwin had no issue. With ten children in 20 years, she had done her duty by Joseph and the country to which she had arrived as an orphan. Mary died in North Fremantle on 28 Jan 1925 and was buried in Fremantle Cemetery.