Is this a portrait of Lord Cardigan as St George?

Philip Boys, son and heir of  E J (Jim) Boys’ almost life-long love affair with the Lives of the Light Brigade, has been a correspondent of mine since my interest in the Western Australian veterans of the Crimean War first started.  A casual query to Philip recently about the Royal Patriotic Fund uncovered a fact previously unknown to me:  Philip actually lives in Wandsworth close to the Royal Victorian Patriotic Building,  Part of his response to my query was to send me the contents of a Blog he had written for St George’s Day in 2015.  He kindly gave his permission for me to feature some of it on this website … so here it is:

On St George’s Day I was reminded of this rather wonderful sculpture on the front of an impressive building less than a mile from me in Southwest London. Formerly the Royal Victoria Patriotic Asylum for Girls, it was built by Prince Albert’s Royal Patriotic Fund for the  “Education and Training of three hundred Orphan Daughters of Soldiers, Seamen and Marines who perished in the Russian War, and for those who hereafter may require like succour.”

The architect was Major Rhode Hawkins, working in an overtly medievalist style. The foundation stone was laid by Queen Victoria on 11 July 1857 and the first phase was completed in 1858. The result was judged to be ‘bold, picturesque and effective’ by The Building News (8 October 1858). The first inmates were received on 1 July 1859.

An early “artist’s impression” of the building when work began in 1857 features not a sculpture but a clock. I haven’t been able to find out when or why the decision was made to substitute St George, or indeed who made the sculpture, but it was a striking choice.

St George was an obvious choice of image for this “Patriotic” asylum for girls whose fathers had only recently died in the Crimean War – after all, as England’s patron soldier-saint, his martial and chivalric virtues in defence of a maiden in distress were well-known. There is a long and deep royal connection: St George’s Chapel, Windsor; the Order of the Garter. And George also has multiple associations with the “East”: with his homeland, Turkey; with the Crusades to recapture Jerusalem; and possibly even with the defeat of Russia, that dragon from the East.

In short, St George fits perfectly into the medievalist romanticism of the architecture. That said, the living conditions inside were no less “medieval”:

Life for the orphans was extremely harsh. Their work included pumping water by hand from an underground rainwater system in the rear courtyard up to the lead-lined slate water tanks in the towers. They had to launder all the clothes. Their heads were shaved to discourage head lice and they were made to assemble in the courtyards every morning to be hosed down with cold water. The patented warm air heating system failed to work. Fireplaces were added to the staff rooms but no heating was provided to the dormitories. [The Royal Patriotic Building History website 2020].

But is St George modelled on Cardigan? George is almost always portrayed young and clean-shaven, yet this St George is a mature, rather fatherly older man. Moreover, explicit references were indeed made just after the Charge to Cardigan as the inheritor of Richard I’s “lion heart”. (It was Richard who brought St George and his red cross back to Britain.) And of course it’s the trademark moustache that’s surely most suggestive.

But if it is indeed Cardigan, shouldn’t St George be on horseback? This is indeed a little odd as almost all previous images (and there many)  depict George mounted. But of course the Asylum would be taking girls not only from all regiments of the army, not just the cavalry, and also from the navy and marines. Surely depicting St George on horseback would have been both too obvious and too potentially divisive? (Besides, the erect St George fits the space better.) Anyway, many subsequent depictions of St George on war memorials (and there are many) after the First World War show him standing erect.

An even more persuasive objection is that Cardigan should have been the last to be chosen as a “father figure” to the girls. He himself had no legitimate children (hence his famous line when embarking on the Charge, “Here goes the last of the Brudenells”), only (according to his biographer John Sweetman writing in the DNB) a number of illegitimate ones. Undoubtedly brave in battle, he was, as Anglesey put it, also “an insufferable cad… he behaved towards women like an insensitive, overbearing, over-rich, spoilt child.’ [A History of the British Cavalry, vol.2, p.109].

So not such a good “father figure”, then. Even at the age of 65, having fallen badly while hunting and thereafter suffering seizures, his “taste for flirtation hardly diminished … he seduced Sir William Leeson’s young wife, and in 1857 took as his mistress Adeline De Horsey” [Sweetman, DNB]. Cardigan was 60 and the glamorous Adeline Horsey de Horsey (you couldn’t make it up) was twenty-seven years his junior. But his reputation in 1857, while the building was going up, was still relatively intact.

Interestingly the couple themselves had a pronounced taste for medievalist sculpture – see their bizarre tomb at Deene Church. 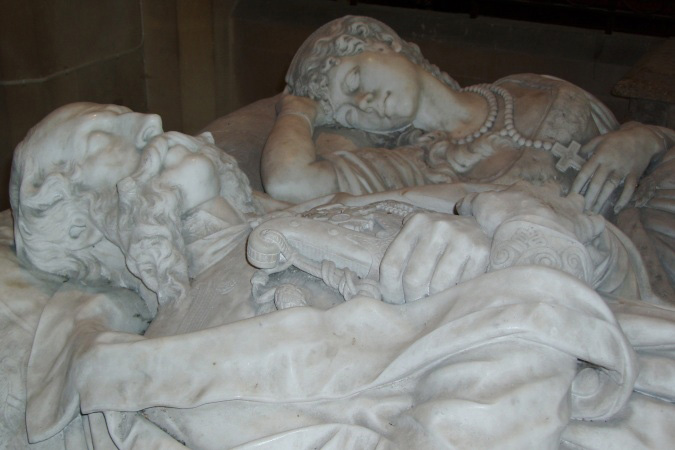 Thank you Philip for sharing this with my readers.  I would like to know what they think about your question:

Is this a portrait of Lord Cardigan as St George?