The varied career of Edward James 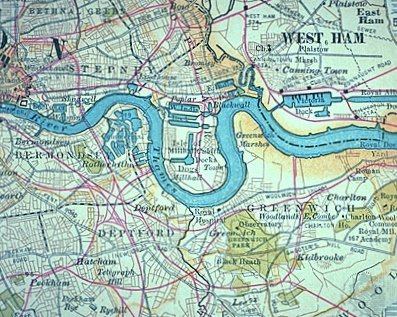 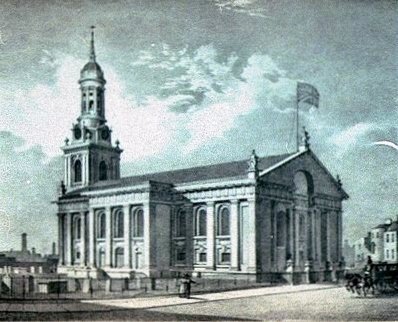 Only Deptford Creek separates Deptford, where Edward James was born, from his place of baptism St Alfege (St Alphage) Church, Greenwich.  Nearby Blackwall Reach, West India Quay, Millwall Dock, Royal Greenwich Naval College all conjure up a vision of a sea-going career.  But Edward enlisted in a cavalry regiment of the British Army in 1850 and from barracks life at the cavalry depot in Maidstone, he was thrust into the Crimean War. His regiment, the 6th (Inniskilling) Dragoons would join the 1st and 2nd Dragoons and the 4th and 5th Dragoon Guards to form the Heavy Brigade. 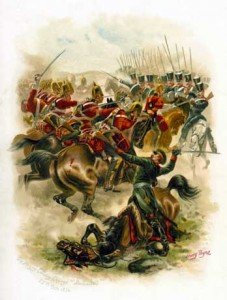 Balaclava
On the 31st May 1854, on the way out to the Crimean Peninsula, fire broke out on the Europa, one of the transport ships. The Inniskilling’s commanding officer, Lt Col Willoughby Moore, a probationary veterinary surgeon, 16 men, Mrs Parsons, wife of Private William Parsons, and all the horses were lost. A further 75 horses were lost in a gale and cholera ravished the men. The regiment arrived in the British base at Balaclava much diminished. On 25th October the Russians attacked the British base. The Heavy Brigade, some 700 men from the five Dragoon regiments, faced a Russian cavalry force of about 2000. The Brigade, commanded by Brigadier-General Scarlett, charged uphill at the enemy. Such was the ferocity of the attack that the Russians began to falter and then to retreat. The whole action took only eight minutes. The Inniskillings lost two men killed and 14 wounded. Though ordered to follow the Light Brigade later that day in its disastrous charge, the Heavy Brigade was stopped in time when the mistake was realised. The Inniskillings continued to play a role at Inkerman and Sevastopol and by the end of the the campaign the death toll rose to over 120‚ a testament to disease and hardship.

Edward returned home from his first taste of battle, the recipient of the Crimea Medal with clasps for Balaclava, Inkerman and Sevastopol.  He was lucky to be alive.  He left the Army at his own request on 8th April 1857.

India
Clearly Army life suited him since ten months later he enlisted in the East India Company’s Bengal Artillery, enlisting at Warley, Essex in January 1858.  He could have barely reached India when his first love, the cavalry, called.  He transferred into the newly formed 3rd Bengal European Light Cavalry in July 1858, the title suggesting a predominance of white troops, possibly recruited hastily to replace the holes left by the Indian mutineers. Edward entered the regiment as a Private but was soon promoted to Troop Sergeant Major. In 1861, the 1st to 3rd Bengal European regiments were transferred to the British Army as the 19th, 20th and 21st Hussars.  Edward was back in a British cavalry regiment.  He served in India for over 11 years and was discharged as a consequence of being found “unfit for further service” on 26th April 1870. He left active military service with the rank of Regimental Sergeant Major a Long Service and Good Conduct Medal with an annuity of £15. He had elected to receive the ‘Queen’s pension rules’ (as opposed to the Indian pension rules) of 2 shillings and a halfpenny per day.  During his service he had sustained a rupture during a riding school accident and had impaired vision.  He was nearly 40 years old and lucky to be alive. 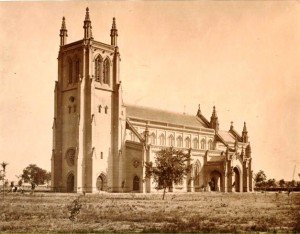 Edward returned to the places of his childhood – the Thames-side areas of Blackheath and West Ham.  But now he had a family – a wife, two step children and four of his own all born in India; the youngest born in Deolalee*, Bombay, only weeks before their return to England. The fifth child of the marriage was born in the cooler climes of West Ham and the remaining three in Western Australia.
(Left: St Paul’s Umballa, place of family baptisms)

Western Australia
After over three years in England perhaps with no prospects of being able to ‘contribute to his own support’– the optimistic phrase in his discharge papers – Edward took the brave step of bringing his family to Western Australia, he as a recruit of the Enrolled Pensioner Force.  The family boarded the ship Naval Brigade in October 1873 and arrived in Fremantle in February 1874 – together with fifty other military pensioners, some of them fellow Crimean War veterans.

It is reasonable to surmise that the current Chief of Police in the Colony – Superintendent Matthew Skinner Smith, whose family had strong Indian service traditions – eventually heard good things about the veteran and made him an offer. Edward James became a probationary constable in early 1877 and was sworn in as a 3rd Class Constable in May 1877. Available data indicates he served in and around Perth.  In June 1883 Edward received a land grant at Claisebrooke, at a time when he was doing well in the police. He was promoted to 1st Class Constable and then to Lance Corporal in February and May of that year.

Unfortunately, all was not well in the physical sense and he resigned for health reasons on 17th October 1883, receiving a gratuity of over £58 from police funds for his years of service. By then the Enrolled Guard, as it had become, had been phased out, but Edward found a place in the Perth Rifle Volunteers as a Sergeant Major and Drill Instructor.

In 1886 the Acting Police Superintendent George Phillips (Lieutenant Colonel and Commandant of the WA Defence Force) devised a system of formal instruction for police recruits. In December 1886 he planned to create the post of Sergeant and Drill Instructor. From that date Edward James was named as ‘Temporary Drill Instructor’ in the Police Force. He was ‘on loan’ from the Colonial Defence Force and held no formal police position.

Edward James can take full credit for being the first training officer appointed by the WA Police in the critical establishment of a formalised system for the instruction of recruits. Sad to relate, James did not live long to enjoy these obvious signs of public recognition and respect. He died in January 1887 and was replaced as Drill Instructor by Constable Alexander Howie, a veteran of a South African police establishment.

Deolali, a hill resort a hundred miles or so from Bombay (en route to Meerut) was the first stage.  It was an agreeable place to serve, and well known throughout the British Army in India as the place to acquire the ‘Deolali Tap’ – that is, to go stark, raving mad, crazy, berserk, demented or simply ‘puggled’ [drunk], faked or otherwise.  It was the dream and design of many a soldier to get there, as it was often the prelude to being diagnosed as ‘mental’ and thus becoming eligible to catch the next boat home. [From Pick Up Your Parrots and Monkeys by William Pennington.]