Something for the experts

More than once I have  visited John Burridge and his son David at their military antiques’ business in Swanbourne, Western Australia.  John has been a long-time favourite of anyone trading or simply wanting information about military memorabilia.  I already knew that the Perth Museum, Fremantle Army Museum and State Library are holders of Crimea War Medals, courtesy of descendants of the veterans who came to Western Australia; and one of my visits to the Burridge establishment uncovered more treasures of Crimea War Medals in their collection.  They were good enough to allow the medals to be photographed.

One of the worrying things about Crimean War research is the number of anomalies thrown up by not only often inaccurate obituaries in newspapers, but disturbing anomalies in Army service papers and medal rolls.  Take, for example, the ‘crop’ of medals with clasps sighted in June 2015.  All the medals show obverse and reverse views. 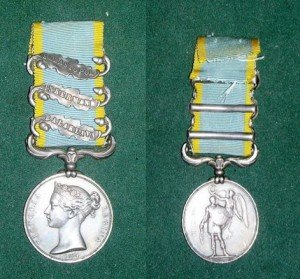 The medal (above) of John O’Connor/O’Conner (4th Dragoon Guards) is exactly as expected in the official records
(Crimea Medal with clasps for Balaklava, Inkermann and Sebastopol).

So too is this medal of Michael Mack (19th Regiment) (above) which has the Sebastopol clasp with the bonus of an invitation to an Anniversary of the Battle of Alma.  It has to be said that Mack did not appear on the medal roll for Alma, although his regiment was present. There is a possibility that the ribbon on this medal was home-made. 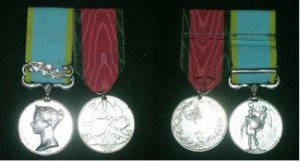 Thomas Butler (3rd Regiment) according to both copies of the medal roll was entitled only to the Crimea War Medal (no clasps); his discharge papers do not mention the Sebastopol clasp shown (right) either.  I must say he probably deserved it since he was wounded at the Redan.

The ‘set’ of Daniel Carty (63rd Regiment) and Hugh O’Hanlon (57th Regiment) is of particular interest.  Why were the medals together?  Maybe because Daniel Carty (McCarthy) had married Catherine O’Hanlon in 1888; the 63 year old O’Hanlon had died the year before.

To sort out what’s what:  Daniel Carty was awarded the Crimea War Medal with clasps for Alma, Balaklava, Inkermann and Sebastopol and the Turkish Crimea Medal; he was also the recipient of the Army Long Service and Good Conduct Medal.  Hugh O’Hanlon (according to his discharge papers) had lost his Turkish Crimea Medal – but he certainly would have received one.  The image of the medals show that he received clasps with his Crimea War Medal for Alma, Inkermann and Sebastopol, as does the Disbandment of the Enrolled Guard record at 31st March 1887 (the year he died).  This is undoubtedly an error as the 57th Regiment did not see action at the Battle of the River Alma. The medal rolls for O’Hanlon confirm that he received clasps for Balaklava, Inkermann and Sebastopol.  His Army papers indicate a bizarre record of a man who was 25 times mentioned in the Defaulters’ Book and was five times court martialled, yet he received four Good Conduct Badges and the pay to go with them; a forgiving institution indeed! 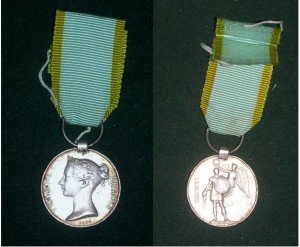 Daniel Leary (57th Regiment) has no clasps on the medal shown and his discharge papers do not mention medals.  Nonetheless he is on the medal rolls for Balaklava, Inkermann and Sebastopol (but not Alma).  He was wounded at Inkerman and sent back to England in December 1854, which throws the Sebastopol clasp into doubt as we can assume he was hospitalised in November when the Sevastopol action had only been underway a few weeks.

Acknowledged with thanks – the photography by Marjorie Burton.

From Michael Hargreave Mawson ….. the expert I asked for!

“I spotted the plea for comments about apparent anomalies connected with medals and clasps, so here goes:

Due to the nature of the Royal Warrant awarding the clasp for the siege of Sebastopol, it is an unequivocal certainty that anyone whose name appears on a roll for the Balaklava or Inkermann clasp (such as Daniel Leary of the 57th) was also going to be entitled to the Sebastopol clasp.   Indeed, anyone who landed in the Crimea between the qualifying dates – regardless of whether he ever made it to the trenches – was entitled to the clasp.   The clasps were granted in a sequence that may appear confusing.   When the Crimea Medal was first announced, clasps for Alma and Inkermann were too.   It was not until some months later that a clasp for Balaklava was granted (the British do not normally award battle clasps for defeats, but Balaklava was eventually deemed exceptional, or a moral victory or something . . .).   The clasp for Sebastopol was only announced months after the first of the medals had already been struck and sent out to the Crimea for issue, which is one reason why this clasp is sometimes found to be absent from medals.

Thomas Butler’s discharge papers do not mention that he received a clasp for Sebastopol because he was discharged from the Army on 16th October, 1855.   The clasp was not announced until 31st October.   Having been wounded at the first assault on the Redan, he was certainly entitled to it!

The 57th Regiment did not serve at Alma.   The Regiment did not land in the Crimea until 23rd September, 1854, three days after the battle.   The presence of an Alma clasp on O’Hanlon’s medal is perhaps an error by the issuing authority, or perhaps a later mistake when a damaged medal was repaired using spare parts from others.

Daniel Leary’s medal is not only missing its clasps, but also its original suspension.   The weakest part of a Crimea Medal is where the suspension joins the medal disc, and when this works loose (or snaps), the clasps and suspension go one way, and the medal disc another.   As you can see, a replacement suspension has been bodged up – presumably the original, complete with clasps, was irretrievably lost.”