Sergeant Wilson and the Deserter

In 1840 the 11th Light Dragoons provided escort to H.R.H. Prince Albert on his journey to London prior to his marriage to Queen Victoria.  The regiment, of which the Prince became colonel, was directed to be formed into a hussar corps under the title “Prince Albert’s Own”. The blue uniform gave way to a blue and gold tunic with scarlet trousers (scarlet the colour of the Saxe Coburgs). These colours had not previously been worn by any other British hussar regiment. 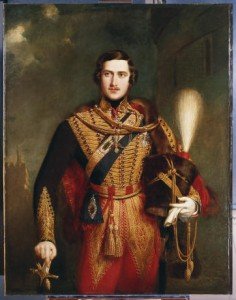 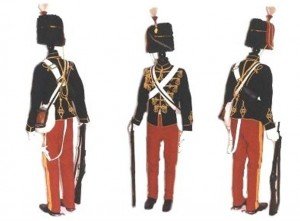 Charles Wilson enlisted in the 11th Hussars in London on 14th December 1854.   The Regiment had already left for Turkey by this time and had served in Bulgaria prior to landing on the Crimean peninsula. Before Wilson joined his regiment, it had engaged at Alma, Balaclava and Inkerman. The men of the 11th Hussars took part in the Charge of the Light Brigade; Wilson may have ultimately rubbed shoulders with those who survived death, injury or Russian capture.  Wilson’s involvement in the Crimean conflict did not begin until he joined the regiment on 25th May 1855. He was swiftly promoted from Private to Corporal on 1st June and was engaged at Sevastopol as he is recorded in receipt of the clasp for his Crimea War medal. Nonetheless his Army experience was short-lived as he was arrested at Camp Sebastopol on or about the 10th December 1855.

The Court Martial Register (Abroad) for 1855 records the ‘substance of charge’ as murder, and the ‘sentence as approved’ 14 years transportation.  There are no records extant to indicate that Wilson was promoted to Sergeant (he is recorded as Corporal in the medal roll for the Sevastopol clasp), yet he is frequently referred to as ‘Sergeant’ in documents telling his story. So what was the story?

Wilson was stationed at Kamiesch on detached duty with the Telegraph and orderlies.  In late 1854, the British government had created a military Telegraph Detachment for the Army commanded by an officer of the Royal Engineers and twenty-five men from the Royal Corps of Sappers & Miners. One can only assume that Wilson’s duty was related to some kind of oversight of the telegraph operations at the French Camp. The French Army initially relied on semaphore for its field signalling between the Sebastopol front and its base at Kameisch, but later also laid electric circuits, using the American telegraph.

The French had set up a supply base between Kamiesch and the siege lines of Sevastopol. Warehouses, slaughterhouses, whorehouses, shops and stalls sprang up around Kamiesch Bay. A French officer wrote home to his family: You can find whatever you want here; I even saw two fashion shops selling perfumes and hats from Paris – for the cantinières [literal translation, canteen women].  I have visited Balaklava – what a pitiful comparison.

It seems that a John Forrest, a deserter, was working at a bar/café in Kamiesch (perhaps the building in the illustration).  It was alleged that Charles Wilson owed him money for drink and Forrest reported him (a risky decision by a deserter!). This created ill-feeling, and as Forrest was known to be a deserter, Sergeant Wilson, out of spite, rode up and told Forrest to follow him, as he was a deserter. At this Forrest asked him for his authority, saying at the same time, that if he was a deserter, what business it was of his. Wilson told him that if he did not follow him he would shoot him, at which Forrest turned round and told him to ‘shoot away’. Wilson there and then drew his pistol from its holster and shot him dead.

The Court found Wilson guilty of manslaughter and in view of evidence of previous good conduct sentenced him to be transported for 14 years.

Wilson had been confined in Sevastopol for a month and then sent to Scutari for two weeks to await a ship back to England – he was on board for two months and 15 days.  He was received at Millbank Prison on 7th April 1856, his Army discharge effective on that day. His Parchment Certificate of Discharge was authorised on 8th April and issued on 18th April.  Wilson’s service was calculated as one year and 135 days and the remainder forfeited.  It was recorded that his conduct was “good previous to trial” and that he was not in possession of any Good Conduct badges.

While Wilson was in Millbank he was permitted to have visits from his wife, Mrs Eliza Wilson whose address was given as 14 Lawrence Street, Chelsea.  It was noted in the prison register that he had one child. His time at Millbank was just short of 12 months. He was transferred to Portland Prison and received there on 12th March 1857.  The Portland Prison register details differed in no way from Millbank’s apart from his register number. Throughout his time in both prisons his character and health were described as good. On 10th September he was one of 270 convicts who embarked on the Nile bound for Western Australia.

The journey to Western Australia was far from ‘plain sailing’.  Trouble with the prisoners was experienced between Plymouth, the departure point for the Nile on 23rd September 1857, and Bahia, Brazil a port of call en route.  Two of the convicts died on the voyage but after Bahia the ship arrived without further serious incident on New Year’s Day in 1858. Charles Wilson was consigned to Fremantle Prison (#4523) and by some miracle of record-keeping was given a change of occupation from ‘weaver’ to ‘labourer’.

Wilson received his Ticket of Leave on 26th March 1859 and the records show that as of 15th July he was working for a Mr Loorey (Loovey) as a groom.  Wilson’s horsemanship would have been excellent given that he served in a cavalry regiment.  He went on to receive his conditional pardon in July 1861.

Charles Wilson died in the Mount Eliza Invalid Depot on Monday, 3rd May 1886 aged about 67. His death was ‘under somewhat peculiar circumstances’ as can be seen in the newspaper report.  He was buried in East Perth Cemetery.