In December 2012 my research colleague, Jeanette Lee who specialises in the men of the Enrolled Pensioner Force, contacted me about an amusing tale she had found in a book entitled The Mills of Jarrahdale by V G Fall (1972). The tale is as follows: 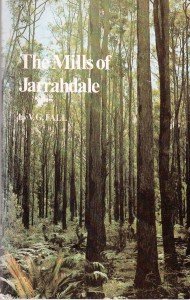 Jack Hughes died about 1925 [sic] at the age of 99 [years] and 46 weeks. He was a veteran of the Crimean War (1854) I remember him as a stooped old man with a large white beard pushing a wheelbarrow full of firewood alongside of the railway line which ran alongside the steam pumping station and the chaff house. I believe that he lived in a shanty at the “Points’. Every Thursday (Pension Day) he would meet up with Granny Fowler with her horse and cart and they’d go to the Post Office. Having received their pensions they would call at “The Murray Arms” hotel and purchase a bottle of beer before continuing home. On the day in question, two Methodist women missionaries were visiting their parishioners and they arrived at the Hughes home and knocked at the door. “Come in”, said Jack and they opened the door and entered. They were shocked at what they saw. There was Jack at one end of the table and Granny at the other. Between them stood an opened bottle of beer and each had a glass full of beer. “Oh Mr. Hughes! You should not drink that, its poison!” Jack answered curtly “Well Madam I’ve been drinking it for the past 50 years and if it does kill me it will be a pleasant death”.

At the time we both followed up this tale by investigating the newspaper resources of TROVE (1) and discovered many accounts of this man’s death and funeral, just short of his 100th birthday on the date given by himself to the Master of the Claremont Men’s Home as 14th February 1824.

Then in April 2014, Leonie Liveris of Curtin University contacted me about John (Jack) Hughes and the other Claremont Home residents allegedly in the Crimean War: Edwin Wilcox (Willcocks) and Vincent John Hillier, all of whom were mentioned in newspapers in January 1924. My comments in response to Leonie’s queries are in footnote (2) of this story.

More recently, but 192 years since Jack’s birthday, I was researching another John Hughes: a Sapper and Miner who arrived in Western Australia in January 1858 to join the 20th Company of Royal Engineers working with the Convict Establishment. Sapper John Hughes could well have fought in the Crimean War and Indian Mutiny prior to boarding the ship Nile. I remembered Jack Hughes of Jarrahdale and wondered, for a short time, if they were indeed the same man. There is so little information about either of their origins it could have been possible. Nonetheless I discarded the notion based on a newspaper account that Jack of Jarrahdale was a blacksmith who had arrived in WA 50 years prior to his death (1874), while Sapper Hughes was a mason who arrived 16 years earlier.

We cannot be sure his birthdate is correct and we don’t even know if he was married with children. I have asked local historians Wilma Mann and Di Henniker to try to find out about his life in Jarrahdale, but to date there has been nothing. Probate documents I found in the State Records Office citing a John Hughes [Cons 3403-1925-556] were in no way related to our ‘centenarian’ since they belonged to a John Hughes of Subiaco, widow Gertrude nee Burleigh; his date of death 7 Oct 1925, was some 20 months after our man. 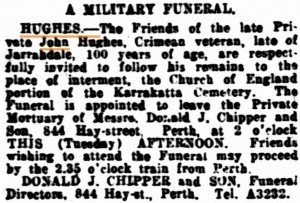 Jack Hughes’ mates in the Claremont Old Men’s Home celebrated his birthday with a cake made for the ‘ton’ Jack didn’t live to see. He was buried on 29 Jan 1924 in Karrakatta Cemetery’s Anglican section JA, gravesite 0170.

(2) Extract of my research findings forwarded to Leonie Liveris regarding Edwin Wilcox and Vincent John Hillier on 28 Apr 2014 are as follows:

Edwin Wilcox, Wilcocks, Willcocks etc.
I have a perfect contender for Edwin Wilcox in the Army – the only man of that name in the Crimean War – he was with the 34th Regiment of Foot.  Unfortunately ‘Old Ned’ said he was in the Navy.  I have checked the medal rolls for the navy – all naval personnel who served in the Crimean War or the Baltic War received a medal but there is nothing for Edwin Wilcox and all the spelling variations.  So maybe a tall tale.

Vincent John Helier, Hellier, Hellyer, Hillier etc.
There are so many flaws in his stories as reported by the newspapers.