Patrick Keating was a soldier in the 5th Dragoon Guards. The 4th, 5th and the 6th regiments of Dragoon Guards, who had last fought together at the Boyne, rode together in the charge of the Heavy Brigade at Balaclava on 25th October 1854. In this action, eight hundred men, commanded by General James York Scarlett, himself a past Commanding Officer of the 5th Dragoon Guards, utterly routed nearly three thousand five hundred of the Tsar’s finest Cavalry, with minimal loss to themselves.

Strangely, although the Light Brigade charge has inspired more interest than perhaps any other incident in British military history, the charge by the heavy cavalry outside Balaklava a little earlier on the same day is almost unknown outside Crimean War circles.  Its success probably counts against it, as Britons seem to glory more in gallant failure than in a well-executed and effective action, even one against large odds. . . . For such was the Charge of the Heavy Brigade. [Book Review by the late Major Colin Robins, OBE of Lawrence Crider’s  In Search of the Heavy Brigade.]

After returning home in May 1856 the regiment was stationed in England and Ireland.  It was in Dublin when Keating was charged with not declaring his knowledge of an intended mutiny. Charged at the same time with the same offence were Sergeant Charles McCarthy, Private Michael Harrington, Private Thomas Darragh and Captain James Murphy.  Witnesses at the trial swore that Keating had been in Curran’s and Barclay’s public houses the previous January discussing mutiny, and had harboured two deserters (Privates Hogan and Wilson); others claimed he was not at any such meeting as he was playing cards in the barracks.  It was alleged that all were sworn Fenians. Lieutenant and Adjutant Gist of the 5th Dragoon Guards stood as a character witness for Keating; his testimony reported briefly in the newspaper, indicated Keating had served almost 20 years in the Army (hence an enlistment date of c. 1846). He attested to Keating’s good character, his Crimean War service medals and good conduct badges. 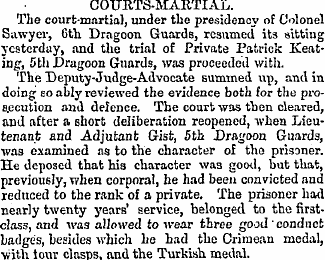 Nonetheless, Keating was found guilty and languished in the prison system for over a year before boarding the Hougoumont, the last of the convict ships bound for Fremantle. He was in the company of sixteen other alleged Fenians court martialled in Ireland in 1866/67.  These included Darragh and Harrington, his co-conspirators and the two deserters Hogan and Wilson.

Within a few years of his incarceration in Fremantle Prison, Keating was hospitalised on and off in the prison hospital and found to be suffering from disease of the pancreas and spleen.  He was granted a ticket of leave on 12th July 1873 in the hope that his health would improve.  His next stop was Guildford Hospital where he remained until the end of the year.  He died in the home of Joseph Noonan and his friend James Wilson on 27th January 1874.

Noonan, who had nursed Keating through his illness in his last days, organised a private funeral which was allowed by the authorities provided there was no Irish demonstration [Barry:136].  A grave was dug beside the Fullam brothers’ gravesite (Luke and Laurence) at Fremantle Cemetery, then located in Skinner Street.  The cost of his funeral arrangements was met from the Prisoner Relief Fund. Keating’s burial has been recorded in East Perth Cemetery, but this is clearly incorrect.

Keating’s Millbank prison record shows that his parents lived in Melbourne.  One wonders if there was correspondence between them and if the authorities notified them of their son’s death.

Ten years after their trials, Darragh, Harrington, Hassett, Hogan and Wilson, together with a Robert Cranston were the six men who escaped Fremantle Prison and boarded the American whaler Catalpa in April 1876.