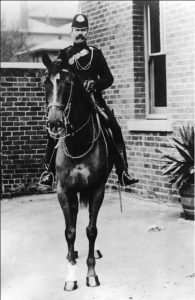 Some parents have a lot to answer for in the choice of their children’s given names. For example, we have a couple married in Albany, Western Australia in January 1890: Hougoumont Archdeacon Rowe (bride) and Frederick Grenada Chester [groom]. But at least for the family historian they are a stand-out. The bride was apparently known as Jean throughout her life. But it is not Jean and Frederick of whom I planned to write; they were but a back-story of a connection to pages in this website about three Crimean War Veterans, including a court martialled Fenian who had earlier taken part in the Charge of the Heavy Brigade. The story was going to be about Thomas Rowe.

Thomas, father of Hougoumont (Jean) born at sea on 14th October 1867, was not a Crimean War Veteran, but over some days I collected information from many sources to support a story that he was an undercover agent on board the last convict ship to Western Australia the Hougoumont. I started to write the story but then decided Thomas Rowe could tell his own story. My aborted attempt at writing about ‘The Fenian Watcher’ allowed me to brush up on my genealogical research skills and to read up on Fenianism and law enforcement in WA. I also revisited the Fenian escape on Catalpa … an event in which Rowe was involved, but did not mention in his story. It took place in Rockingham, where I live, and is every bit as exciting as the Ned Kelly story.

Thank you, Robert Chester for your email which sent me on this mission, Alan Moss from ‘History by the Yard’ (Scotland Yard, that is), and Liz Rushton who edited Thomas Rowe’s story for me from the Geraldton Express and Murchison and Yalgo Goldfields Chronicler. Friday 5 Feb 1904.