Now you see him, now you don’t

To date I have identified four Western Australian Crimean Veterans who served in the 38th (1st Staffordshire) Regiment:  Private William HIGGINS, Private Richard McCORRY, Private James McMahon and Sergeant John Philip LITTON. Higgins, McMahon and McCorry were awarded the Crimea Medal with clasps for Alma, Inkerman and Sebastopol, but Litton allegedly received only the Alma and Sebastopol clasps. Three of the men were awarded the Indian Mutiny medal. In the case of Higgins and McCorry the Crimea Medal and clasps and the Indian Mutiny medal are mentioned in their WO97 discharge papers. This was not the case for Litton – I had to check the medal rolls for his awards as his Army papers were silent on this subject, but Litton’s name was there on the roll for Alma (but not Inkermann) and Sebastopol [WO100-29-folios 22, 59 & 101]. McMahon was sent back to England and discharged to pension before the Indian Mutiny Campaign commenced.

I found very little information about the 38th Regiment on the Internet while searching for photographs and graphics for this website.  It seems that the forum administrator of the Victorian Wars Forum also felt this regiment was understated and wrote an excellent article for the forum in which he stated, “The story of the Battle of Balaclava, the Charge of the Light Brigade and the ‘Thin Red Line’ are well known but less well known is the fact that some 41 men of the 38th Foot were also present at the action.”  This was news to me.  The administrator quoted as one of the sources for his article “Vale, W. L. (1969) ‘History of the South Staffordshire Regiment.’ Gale & Polden Ltd.”

Armed with this information, I again checked the medal roll entries for my three WA veterans. In Litton’s record I discovered a previously overlooked remark written on folio 59 (his Alma/Inkermann page).  It reads “B [the letter B as a capital] Baliklava 22nd  Octbr. Appln B Cl 27/9”.  In all the Alma/Inkermann medal rolls I have checked, the capital letter B is always followed by an entry on the Balaclava roll. Did this mean that he was sent to Balaclava three days before the battle and an application was made for a Balaclava clasp the following September?  Was he actually one of the 41 men?

Medal Roll 38th Regiment. Notation to Litton entry added : Appln B Cl 27/9  [WO100-29 folio 59]
Fast forward an hour or so, and I was once again searching the Internet for the 38th Regiment. This time I came up with a website page from North East Medals.  It showed a transcription of the names of the 41 men at Balaclava with this heading: “The Regimental History (Vale) states “On the 25th October 1854, occurred the battle of Balaclava with its two famous cavalry charges and the celebrated ‘Thin red line’ defence by the 93rd Argyle and Sutherland Highlanders, who had with them some convalescents from the port including an officer and forty other ranks of the 38th” . This figure of 41 is confirmed exactly on the Crimea roll for the 38th.”  Litton was definitely NOT on the list; but two other men (James Lynch and Felix McCarthy) were on folio 59 medal roll with Litton and on the North East Medal list. Lynch and McCarthy were also on the original medal roll for the Balaclava clasp but NOT Litton [WO100-29-folio 39/40].

Was John Philip Litton the ‘ghost of Balaclava’ – now you see him, now you don’t?  Was the application for the Balaclava clasp refused or did an Army clerk 160 years ago forget to add his name to the Balaclava roll? What to do? Look for other evidence of course.

When Rica Erickson compiled her four-volume Bicentennial Dictionary of Western Australia she utilised contributions from descendants of WA’s pioneers (1829-1888); the source material for these contributions is on film in the Battye Library which houses the WA historical collections of the State Library. One such contribution from a Litton descendant states: “Member of Army.  Charge of the Light Brigade and Indian Mutiny.”  Did this descendant see Litton’s medal with a clasp for Balaclava and make the common mistake that the only action at Balaclava was the Charge of the Light Brigade? 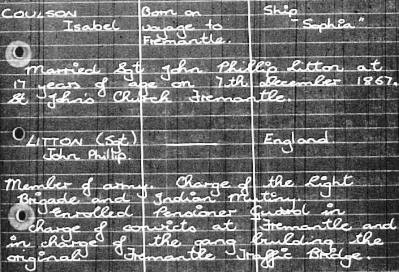 Sergeant John Phillip Litton is recorded on the ‘Members of the Enrolled Guard at Fremantle’ (1887, the year of disbandment).  Among the many details printed on this nominal roll are their years of Army service and their medals and clasps.  Litton is recorded with three medals (Crimea, Turkish-Crimea and Indian Mutiny) and four clasps (Alma, Balaclava, Sevastopol and Lucknow).

So was he there at Balaclava, the forty-second man of the 38th ….. what do YOU think?

POST SCRIPT:  A recently acquired copy of John Philip Litton’s Account Book clearly indicates (p.14) that he was present at Alma, Balaclava and
the Siege of Sebastopol. Furthermore, his Parchment Certificate reads “that he is in possession of the Crimean Medal and 3 clasps”.  (8 Nov 2015).