Henry Passmore, a true servant of the people

by Diane Oldman
(With grateful thanks to Sam and Margaret Hancock and Shelley Yeo whose material both corroborated and added to my own research.)

Henry Passmore’s birth certificate states that he was born on 29th February 1840 in Raleigh Pilton, his baptism in the Pilton Parish Church was a month later.  However, his Royal Navy service documents record the date 28th December 1839.  Was this a clerical error or was it a young man’s need to enter the service a wee bit under-age?  – what was the harm in ‘fudging’ a birth date by ten months; he was 14 when he enlisted.

Henry’s father, John, was in the lace making industry  in Pilton, Devon.  It appears that anyone over ten years old  in that village – now a suburb of Barnstaple – was engaged in the manufacture of lace, wool and allied trades. Henry was no exception; he was a machine boy when recorded in the 1851 census, just past his eleventh birthday.

Life on the Ocean Wave
Henry joined the Royal Navy as a ‘Boy Second Class’ on the training ship Impregnable.  Within a few months he would be sailing off to war.  Too often historical writing on the Russian War of 1854-56 focuses narrowly on the land campaign fought on the Crimean peninsula in the Black Sea. The wider war waged at sea by the British and French navies against the Russians is ignored. These neglected naval campaigns were remarkably successful, in contrast to the wretched failures that beset the British army on land. Allied warships ranged across Russian waters sinking shipping, disrupting trade, raiding ports, bombarding fortresses, destroying vast quantities of stores and shelling coastal towns. Henry Passmore, the lace-maker’s son, was there. 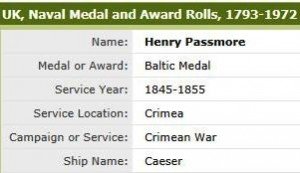 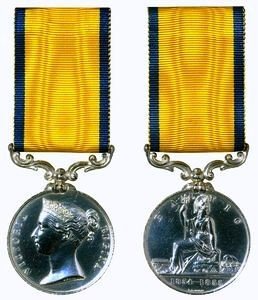 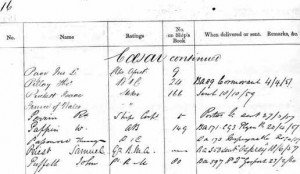 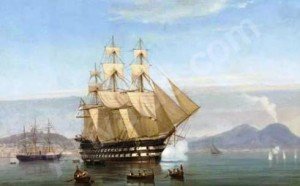 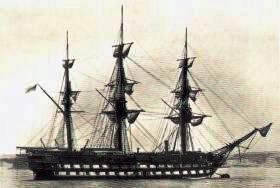 HMS Exmouth and HMS London
before her 1884 conversion in Zanzibar

Henry ‘topped up’ his enlistment in August 1858, six months after his eighteenth birthday.  Clearly the Navy didn’t notice the age-anomaly in the records on this occasion either.  By this time Henry had served on HMS Caesar, Cordelia, Ajax and Exmouth and had risen through the ratings from ‘Boy’ second and first class to Able Seaman, Assistant Stoker and Stoker. He completed his naval career on board HMS London in 1862.

The Gaoler
Henry  became an Assistant Warder at Dartmoor Prison on 12th August 1863. The prison had been built by Napoleonic prisoners of war. It took three years to build and construction was completed in 1809;  three years later the French prisoners were joined by American prisoners of war taken in 1812. One wonders if Henry saw the irony of working in a prison built by French prisoners, the French so recently his allies in the Baltic War conflict. Dartmoor prison was reckoned in Victorian times to be the hardest and most severe in England and has been in constant use since 1850. Henry Passmore, the lace-maker’s son, was there.

Swan River Colony
Henry applied for employment in the prison service in the Swan River Colony in May 1864 stating that he was married with two children.  He re-applied in April 1865 by then stating he had three children (Minnie was born earlier that year).  In his application he stated “I would be able to do my duties as a convict officer far better than a man who has never been to sea”.  That must have won the day as Henry and his family reported to Portland Prison and embarked on the convict transport  Racehorse on 15th May 1865.  Once underway, the voyage took 76 days and arrived in Fremantle on 10th August 1865 with 172 passengers and 278 convicts.  Most of the passengers (159) were those ‘other’ convict guards of the enrolled pensioner force and their families. Henry Passmore, the lace-maker’s son, was there.

A Life of Public Works
Thus began 34 years as a servant of the people of Western Australia. Initially he worked for the Convict Establishment , supervising convicts on a variety of public works involving road making, bridge building, quarrying and boring for water; it is said he put down the first artesian bore and struck water at 172 feet.  He supervised the stabilization of the sand drift in Princess Royal Harbour in Albany.  Perhaps this experience in shifting sand was what C Y O’Connor meant when he allegedly said Henry Passmore gave him the idea of how to remove the sandbar from the mouth of the Swan when he (O’Connor) started the building of Fremantle Harbour. And while in Albany, Henry surveyed and supervised the erection of the first country telephone line for a distance of some 50 miles. His public works duties took him all over the burgeoning Perth area: from Guildford and Caversham to Gingin and boring for coal in Canning. Along the way he had many adventures including supervising the Fenian prisoners – constructing roads from East Perth to Bayswater and Victoria Park to Welshpool Road.  Of ‘Moondyne Joe’ he is quoted as saying: “The newspapers give the account of the extraordinary escape of this extraordinary man. Had the prison officials had one grain of sense would they not have had their bullock team at work every night before leaving off, and have removed the broken metal, so as to give the sentry and every official a clear view of this supposed extraordinary prison breaker?” (Western Mail 29th October 1953).

The Black Swan Dredge
In 1869 the first bucket dredge purchased by the Government arrived from England in sections and was assembled in North Fremantle by a man named Christian. The dredge was variously called ‘The White Elephant’ and ‘the Governor’s Yacht’ or ‘the government dredge’.  The first work undertaken by her was done by convict labour to dredge a  channel from near the Narrows to William Street jetty to allow the steamer and cargo boats to get to the jetty. She then dredged a channel from William Street jetty to Barrack Street, then known as King Cole’s jetty. She was used at Fremantle on several occasions to remove sand banks formed in the bay inside the bar and in the channel of the passenger steamer Lady Stirling and other boats getting to the river jetty at the end of Pier Street.  In the ‘seventies the silt dredged from the channels In Perth water was used to commence the reclamation of the foreshore now known as the Esplanade.  She also landed a large quantity of shell on William Street jetty for  Mr O Randell, then Chairman of the Perth Council, who first used it for the formation of footpaths in Perth. Henry Passmore, the lace-maker’s son, was not only there – he was in charge!

Henry’s son, George Henry Passmore gave a good account of his father’s work with the dredge in a letter to the editor of the West Australian 18th February 1936, when refuting comments in an article previously appearing in that newspaper.  In fact Henry Passmore left the Convict Department on 1st January 1876 in order to continue his work with the dredge under the auspices of the Public Works Department.  Throughout the decade from 1872 and beyond, the adventures of Henry Passmore and the government dredge were rarely out of the press.  Ultimately its usefulness came to an end and for some time it lay idle.  Then in 1887 the dredge was sought for new work.  She was found to be rusted out, thus it was decided to replace the bottom with jarrah and remodel her for greater efficiency. When this work was completed, she was re-launched and given a ‘proper name’ – the Black Swan. Her last job was the reclamation works at Perth Esplanade and Barrack Street East completed in 1911, after which she was scuttled with other redundant plant outside North Mole, Fremantle.

Tragedy Strikes
In  March 1875 infant daughter Jessey died and In April 1877 Henry’s wife Mary also passed away aged 39;  they are buried in the same grave in East Perth Cemetery (L40 499).  This must have caused Henry a great problem because his Western Australian-born children were all under the age of 12.  The solution, a year after Mary’s death was to marry Annie Prior.  Annie was presumably an acceptable housekeeper and mother to the children for more than ten years and then left Henry to return to England (allegedly to join a previous husband there!).  The children all grew to adulthood, married and had families of their own.  Henry married for the third time in 1897 and two years later he retired on combined British and Western Australian Government pensions. 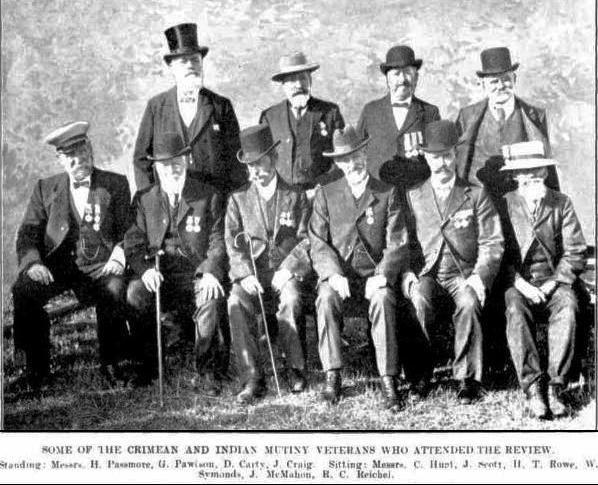 Retirement
Henry Passmore, immediately upon retirement, entered local government on the North Fremantle Council, as well as serving as Justice of the Peace for North Fremantle.  In October 1891 he purchased several  blocks in Bruce Town, North Fremantle; land between Harvest Road and John Street.  He developed seven cottages between 1892 and 1919 and named the area Raleigh Place (later Avenue)after his English birthplace. It was named Passmore Avenue 14 years after his death.

Henry was not quite 60 years old when he retired; plenty of time to enjoy his major hobbies.  He was an accomplished furniture maker and wood carver.  Examples of his work can be seen in Fremantle Museum, the Old Observatory, West Perth and the Royal WA Historical Society. He exhibited his work in Perth on several occasions and also at the India and Colonial Exhibition in London in 1886. One can imagine the genesis of this work – the young sailor whittling away at a piece of timber while at sea.

Henry Passmore’s other passion was  woolwork embroidery (not a surprising talent from the lace-maker’s son.) One particularly interesting work is in the collection of the Royal WA Historical Society – a cricket match on Perth Esplanade from the dredging barge Black Swan.

Henry Passmore died on 6th March 1920 at the age of 80.  He was buried with full military honours at Karrakatta Cemetery. 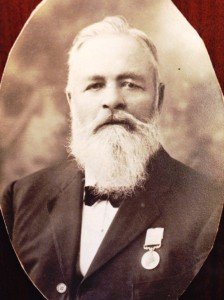 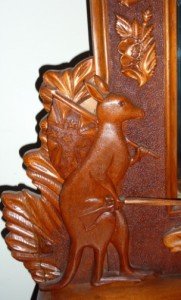 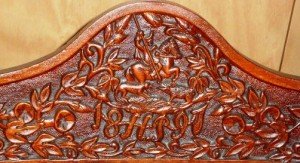