In early 2013 I exchanged correspondence with Tom Goode, then a volunteer at the Fremantle Army Museum.  Tom wrote, in part, The museum holds Crimea War medals for Private D Anderson Scots Fusiliers. ………………Certainly the third one you spotted in the gallery is missing the Turkish medal. I think that one belonged to Pte D Anderson.

From this brief amount of information, I went to work seeking a Crimean War veteran  ‘D Anderson’ in local records.  No D Anderson is recorded in Broomhall’s book (1). No D Anderson is recorded in the more recent publication by M S James (2). Birth, death and marriage indexes in Western Australia show just one David Anderson – this man married an Anne Browne in 1863, and records up to five children of the marriage.

The ubiquitous ancestry.com public trees record a  David James Anderson born in Belfast, Ireland or the Swan River Colony (take your pick). In these records he is the man married to Anne Brown(e) in 1863, but now with eight children of the marriage.  Anne Anderson’s probated Will has been posted on the ancestry trees and indicates she was divorced.  One contributor stated that David James had ‘left for eastern states in 1883’. None of the contributors mentioned participation in the Crimean War. This man is recorded in Erickson’s Bicentennial Dictionary (3) arriving in Western Australia in 1852; this, of course, was prior to the start of the Crimean War.

To return to reality, a Private #4300 David Anderson appears on the Crimean War Medal Rolls with clasps for Alma and Sevastopol while engaged with the 1st Battalion of the Scots Fusilier Guards (4).  This same soldier appears on the Crimean War Casualty Roll (5).  Anderson sustained a wound at the Battle at the River Alma, 22nd September 1854.  The regiment sustained casualties of 75 men at Alma and 98 at Sevastopol (6).

At this point, therefore, there is no proof that the recipient of the Crimean War Medal in the Army Museum made his way to Western Australia. Perhaps, like others in the Army Museum, this family heirloom was brought to this State by descendants who migrated long after Anderson’s death.

Scots Fusilier Guards Badge. Motto: Nemo Me Impune Lacessit (No one provokes me with impunity) 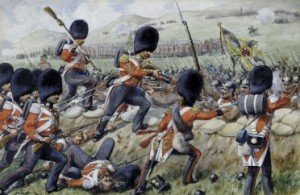 Scots Fusilier Guards at the Battle of Alma [Richard Simkin] 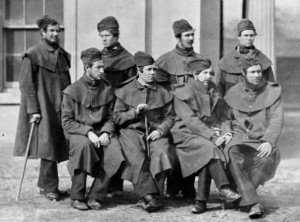