Today (2018) BeauRéal is known as an Ottawa based Indie-Pop-Rocker band! In the mid-19th century in Western Australia, this unusual surname became the reasonably standard spelling ‘Beaureal’ in records for one of our Crimean War veterans. How and where our subject started out was not recorded in WA records, but over the years he had been known as Baureal, Bearal, Beareal, Beariall, Bereal, Berial and Beriall; I may have missed one or two. I am writing of Edward Beaureal who arrived in Fremantle, Western Australia on the convict ship Vimeira on 22nd December 1865. 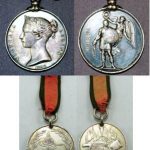 Beaureal joined the 77th (East Middlesex) Regiment as Private #3553. The 77th in 1854 to 1856, served in Bulgaria and the Crimea. It fought at Alma, Inkerman and at the siege of Sevastopol from first to last, including both assaualts on the Redan. Edward Beaureal [as Beareal] received the Crimea War and Turkish Crimea Medals. His name [as Bearial] has been crossed through on the medal roll for entitlement to a clasp for the Fall of Sebastopol, with the notation “at Scutari”. It seems that through injury, sickness or some other reason, he was not present at the end of the Siege. His name does not appear on the Casualty Roll.

The regiment returned to England in July 1856. A year later it was sent to New South Wales, and from there it was despatched to engage in the closing scenes of the Indian Mutiny. The 77th Regiment of Foot had a long history of service in India and continued to do so until the end of the Victorian era.

Beaureal’s return to England began a run of difficulties that saw him tried by District Courts Martial on three occasions, all for desertion and losing his ‘necessaries’. The latter expression referred to Army issued clothing and other accoutrements.  The penalty for ‘losing’ (implying neglect) was generally not as harsh as ‘making away with’. One would have thought that desertion accompanying the loss of necessaries would have been ‘making away with’ … but perhaps this was the Army’s small act of compassion!
21 May 1857 at Colchester – sentence 56 days hard labour, branded with the letter ‘D’ and stoppages.
9 Oct 1857 at Jersey – sentence 168 days hard labour and stoppages. (See sidebar).
22 Dec 1859 at Chatham – sentence 168 days, 14 day solitary and stoppages.

Beaureal [as Beareal] was in Hazaribagh, India in the 1861 second quarter Muster and continued to serve into the following year when he is recorded facing a General Court Martial at Chinsurah*,India for striking a superior officer. His sentence for this crime was seven years penal servitude. Here follows his record of imprisonment and release: 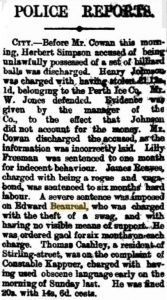 The Fremantle Prison database shows reconvictions under prisoner numbers 10119 and 10359 with sentence periods of three years and seven years respectively. Further research is required to identify the dates and nature of these crimes, but on the surface they appear excessive.

Although newspaper reports from 1888 to 1895 show a good many arrests. cautions and short term imprisonment, these were generally for ticket of leave infringements, drunkenness, vagrancy and loitering; the longest terms of imprisonment being six months each for theft of a swag and having no visible means of support in April 1895, aged about 60.

Personal Description:
Records from prison to prison are remarkably consistent except for minor differences in physical description for height etc.

Origins:
Beaureal was born c. 1834 (aged 28 in 1862). I searched the census records of England & Wales for a Mrs White (his mother) and found too many – of course. But there was one clue for me in this pursuit. I discovered, that Wellingborough, Northamptonshire in the 19th century was a centre for the production of shoes. I tried a search for ‘shoe maker’ in Wellingborough in the 1851 Census; 1,045 of them. I then searched for Edward, ‘shoe maker’; 23 of those. One of them was Edward Berrill, son-in-law of Henry White and his wife Anne. Son-in-law is a pre-20th century term for step-son and Henry White also had a daughter-in-law named Anne. Edward and Anne Berrill were the children of Joseph Berril and Anne Skevington born in Bozeat, Northamptonshire baptised in 1837 and 1839 respectively. Joseph Berril died in 1843 and his widow married Henry White in 1846.

Death:
Edward Beaureal died on 17 Mar 1905, he was a resident of the Old Men’s Depot, Mt Eliza and found near the Stanley Brewery. He was pronounced dead on arrival at the Perth Public Hospital. Cause of death, probably heart disease. He was buried on 20 Mar 1905 in the Anglican Area, Section EC, Gravesite 0137 at Karrakatta Cemetery.