On 1st January 1855 the War Department issued an invitation (incentive) to officers of the Honourable East India Company to serve in a legion to be known variously as the Turkish Contingent, the Anglo-Turkish Contingent or the British Ottoman Contingent. The alliance of British, French and Turks had agreed that in addition to sending regular troops to the Crimea, this special force of infantry, artillery and cavalry would number around 25,000 men.

By March 1855 the first crop of E.I.C. officers was listed in the London Gazette under the heading ‘Brevet’ with promotions to a step of local rank in Turkey while employed in the Turkish Contingent Force. Lieutenant-Colonels to Colonel, Majors to Lieutenant Colonel, Captains to Major, and Lieutenants to Captain took up the challenge and more would follow. While ‘brevet’ would normally mean a promotion in rank but not pay, one of the officers made this comment: “The East India Company, my then paymasters, were strangely jealous that their officers should choose to serve their country for a time under another flag than their own; and, ignoring our having so chosen, proudly rejected the opportunity of withholding from us our Indian furlough-pay.  On the other hand, the British Government, to make the service attractive, offered us the rank and pay of the grade superior to that which we held in the Indian Army.” (J Luther Vaughan). Other applicants were former army and naval officers, civilians now in retirement as ‘gentlemen’. They were to show “previous gallant service, knowledge of languages, general experience and skill in military training and acquaintance with the habits of Mahommedan soldiery”.  (Stephen Z. Starr).  The word ‘mercenary’ comes to mind, but in the 19th century the more romantic ‘soldiers of fortune’ might have described the men of the Turkish Contingent. 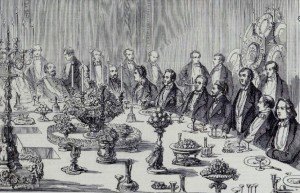 Banquet at the London Tavern 1855 [Illustrated London News]
Less than two weeks earlier, 150 luminaries of the British Army, members of both houses of parliament and the proprietors of the E.I.C., had gathered at a banquet in the London Tavern, to toast Major General Robert J H Vivian who was to be the commander of the Turkish Contingent.

The optimism at the banquet quickly gave way to the reality of poor management, unclear orders from the War Office in London, and the logistics of dealing with a combined force of E.I.C. officers, irregular armies and mixed races.  Vivian had assembled his troops at Constantinople, but by September 1855 it was a case of ‘all dressed up and nowhere to go’ when Sevastopol fell to the allies. Orders trickled through for Vivian with his infantry and artillery to occupy the city of Kerch in order to sever the Russian supply link from the east to the Crimea. 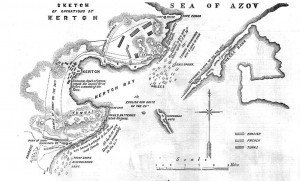 Kerch, situated on the extreme eastern edge of the Crimean peninsula between the Black Sea and the Sea of Azov, was a very long way from the action in the final months of the war. The only real action from this citadel was skirmishes with the Cossack regiments of the Russian Army; Vivian sent for the Contingent’s cavalry – still in Constantinople – to deal with this harassment. Alas by the time the cavalry, its horses and trappings arrived, it had problems getting ashore and returned to Constantinople.  The war limped on during the 1855 winter and was formally finalised in March 1856 with the signing of the Treaty of Paris. It took until May 1856 for most of the Contingent to receive their discharges and return to England.

It is generally thought that all the British men in the Contingent held the rank of officer or non-commissioned officer. However, the Turkish Contingent medal roll shows the names (usually only surnames) of other ranks. Among these men are clerks, storekeepers, wheelwrights, smiths, farriers and even collar-makers!  Among them too are 13 men who came to Western Australia to take up appointments in the Convict Establishment as prison warders.

Captain Morgan, the Turkish Contingent’s recruiter, and Major Graham, the War Department’s Military Agent, both had offices in King Street, Westminster, the London recruiting hub. After the war all applications for prison warders abroad had to be endorsed by Graham, after a personal interview with him. The registers at Kew are very detailed, showing the correspondence between the Colonial Office and the applicant concerning their appointment, preparations for their new job, and arrangements for their embarkation (Leahy).

More about these men will be researched and added as time permits.